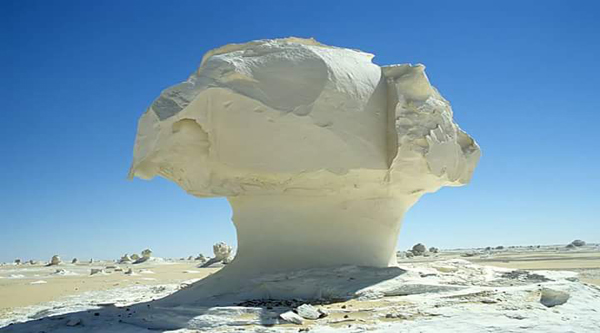 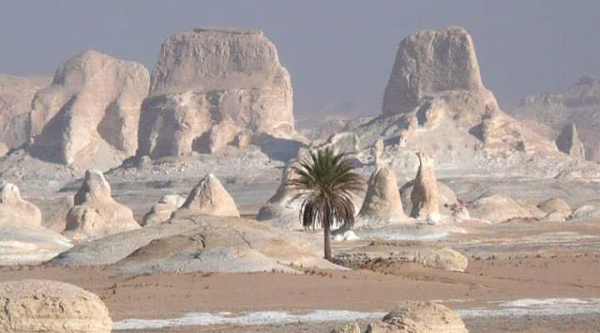 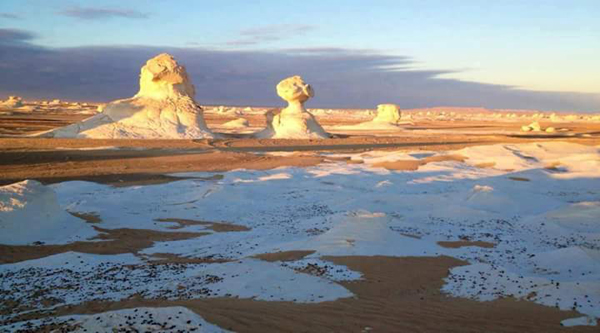 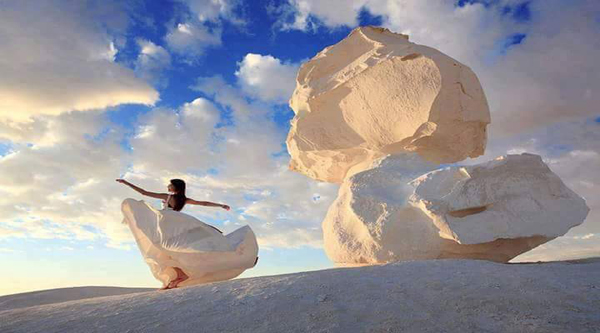 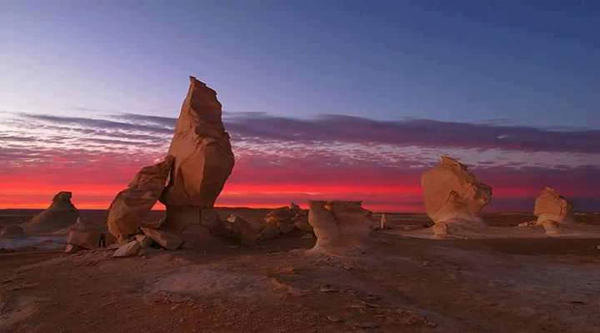 95% of Egypt is covered by a beautiful desert where oases such as Siwas, Faioum, Baharia, Kharga, Dahla and Farafra are the gems and the most attractive places to visit. A wast White Desert with its sands and rock formations is a perfect place for winter desert safari.

Egypt has all sorts of desert terrains, from sand dunes, to rock hills and mountains. and around 96% from Egypt are covered with desert. So you could see sand here every where. It is very exciting too see Oases between the desert. The Nile valley divided the Egyptian desert into tow big pieces:, the western desert, and the eastern desert

It is extended between Nile valley delta (west) to the Red sea (east) and from Mediterranean sea to the Egyptian Sudanese borders, and its a quite different between the western desert where it is more higher. Its 223,000 km2 ,21% from the total area of Egypt. Its heights between 100 and 1500 meters, there are so many mountains such as El Shaib 2185 m, Hamata 1978 m, and Olba 1437. In the past all these mountains were more higher, but erosion factors remove some parts of it . You could make a safaris tour in the desert, it is some thing so exiting and interesting.

Siwa Oases, site in ancient times of the famous oracle of Amun, owes its origins and cultural heritage more to the Berbers of North Africa than to the Egyptian of the Nile Valley. Its clothing , silver, jewelry, and customs are unique to Egypt , and the Siwa language is on of the dialects of Berber. Most celebrated visitor of Siwa was Alexander the Great in 331 B.C., after conquering Egypt without a fight and laying the foundations for the city of Alexandria , he journeyed to Siwa to consult the oracle. His appearance at the temple of Amun immortalized the name of Siwa oases in ancient and modern times.

Today the travelers to Siwa can see the remains of two temples dedicated to the God Amun at Aghurmi four kilometers from the center of town . the first temple where Alexander sough advice is built on a large rock among the crumbling houses of the old village, now deserted. the second , the temple of Umm Ubaydah, stands in palm groves not far from the first.

The third major historical site of interest to visitors is the tombs of Jabal al Matwta (hill of dead )about 1,5 km far from Siwa, the oldest tomb date from the 26th dynasty. Siwa's many springs enable the inhabitants to have gardens and irrigate crops, you can visit the spring of the sun that mentioned by Herodotus in his famous history written in the 5th century, as one of the wonders in the land of the Ammonians. There is a large, lovely spring called Ayn al Hammam (spring of the bath) near the temple of Um Ubayadah the spot where brides bath.

It is 325 km far from Cairo, it has several natural springs some of the springs have a slight iron content . springs in some of the other oases are sulphurous, but this is rare. a few of the springs are very hot, and others are quite cold , Ain al Bishmu on the western edge of Bahariya is at an idyllic 40 degrees centigrade. Rising majestically beyond the spring are two extinct volcanoes called the "pot" and the "ladle".

There are also cisterns from Roman times in Bahariya which once held water fro crops. The scenery on the 200 km trip between Bahariya and Farafra may be the most beautiful in the western desert. On the way south to el Heiz, the desert expanse is dotted with ancient volcanoes rising like black jagged teeth from the smooth sand gleaming in the sun.

There are several mountains and the only preserved church in the Western Desert. It is considered one of the most important Christian monuments in the Oases, and dates from the 5th century A.D. The church was dedicated to St. George. Outside of Farafra the white desert's name derives from the crust of limestone which was formed when this area was covered by a pre-historic sea. There is a variety of fossils and corals embedded in the rock. The outlandish rock formations in abstract shapes and patterns and the crushing silence give a sense of being on the moon.

One of the most interesting life-time excursion is Desert Safari, there you will enjoy with primitive life and discover new world you have never seen before, come away from the modern life and its clamor, come to silence, quietness, beauty, and relaxing, come to Western Desert Safari.