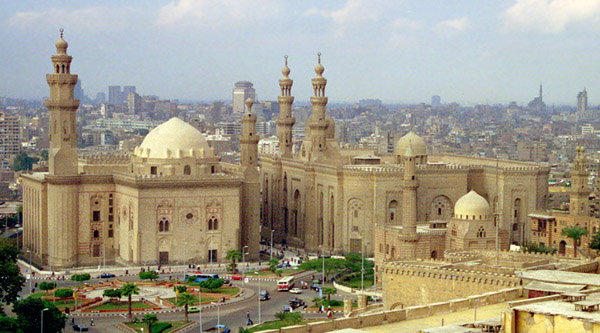 Many ancient monuments, mosques and palaces are situated around the Citadel. Long ago it was the heat of Cairo with lush gardens and beautiful buildings, but even now you still can see the grandeux of the area. Take a tour around Citadel and the area to discover its past glory.

The great square below the Citadel, known as Maydan al-Qa’ala or Maydan Mohammed Ali, is a place for some outstanding medieval buildings. The square, which today seems no more than a busy traffic intersection, was once the setting for elaborate court ceremonies, equestrian games, military exercises, and religious processions.

Now Mohammed Ali street stops at the triple-arched portal that is the entrance to a newly created Sultan Hasan-Rifa’I compound. The canyon-like street that once ran between these monuments has been converted into a breezy marble walkway. Between the compound entrance and the elevated porch entrance of Sultan Hasan is an open garden area, which in medieval times was a large commercial annex that financed the upkeep of Sultan Hasan’s complex.

Madrasa of Sultan Hasan is no doubt one of the masterpieces of Mamluk architecture in Cairo. It is an excellent example of both the massive monumental style of the Bahri period and the cruciform madrasa plan.

Opposite the Madrasa of Sultan Hasan, on the site of zawiya acquired and demolished by the princess Khyshyar, consort of Ibrahim Pasha and mother of Khedive Isma’il, lies another enormous structure. The architect Husayn Pasha Fahmi was empowered to built a mosque with tombs for Shaykh Ali al-Rifa’i, a saint formerly buried in zawiya, and shaykh Abd Allah al-Ansari, a companion of the Prophet, as well as mausoleums for the founder and her descendants. The result is one of the earliest revival monuments in Cairo –mosque of al-Rifa’i. Its neo-Mamluk architectural style and decoration establishes a visual relationship with its neighbor built five hundred years earlier, even though the plan – with its overall symmetry and frontal axiality as well as the large number of funerary chambers around the central prayer chamber – is quite novel.

Leaving the Rifa’I mosque let’s walk back to the triple-arched entrance portal, turn right, and walk a few meters to the first street on the left, Suq al-Silah. At the corner we will find a ruined domed structure. This is the gate to the palace of Mangak al-Yusufi al-Silahdar (the sword bearer or armorer ).

The gate was built at the beginning of his career, and his blazon with the sword of office is a prominent decoration. The shallow dome is also interesting as an example of a pure pendentive system. This gate was at the edge of Suq al-Silah, the Armorers’ Bazaar, whose location near the Citadel was a logical consequence of its strategic importance and of the number of Mamluks quartered in the fortress. The trade of metalworking continues in this area today.

This gate that projects into the maydan was added to the Citadel by Radwan Katkhuda and it is clearly visible from in front of the main entrance into Sultan Hasan complex. The gate was used by the Azaban, the infantry corps of young foot soldiers that occupied the lower levels of the Citadel – as distinct from the older Janissary corps, who occupied the northern enclosure.

Behind and east of the mosque of al-Rifa’i we can easily find mosque-madrasa-mausoleum-sabil-kuttab of Gawhar el-Lala (a free slave in the service of Sultan Barsbay, for whom he served as chief eunuch, then to Barsbay’s son as chief tutor – lala).

The attenuated dome and squat minaret, which seem out of scale, will identify the mosque. After the size and grandeur of al-Rifa’i mosque, the inside of this complex will seem almost miniature, but it is charming and incorporates all the best decorative details of the mid-Mamluk period: attractive marble panels on the floors, a handsome, though faded, lantern cupola above the sahn, a qibla wall paneled in slabs of cook marble in soft colors. If the minbar seems different from the other décor, it is because the original inlaid polygonal inserts have been replaced with plain forms. Notice the way the windows in the qibla wall are angled to adjust the difference between the street façade and the line of the qibla, that is, between two conflicting orientations, between the ostentatious desire to have the façade, its dome and minaret clearly visible from the maydan, and the religious need to have the inside correctly oriented toward Mecca. A gallery in the northwest liwan has been draped so that women may pray there. In 1896 the mosque had been restored by the Comite.

The features that immediately identify the Mosque of Amir Akhur, which is also situated on the Citadel square, are the double finials of the minaret, the forked lower leaves of the fleur-de-lis cresting, and the handsomely carved arabesque surface of the stone dome, with its triangular corner supports. The mosque complex was built in the very late Mamluk period and belonged to Qanibay al-Sayfi, who was a grand master of the horse during the reign of Sultan al-Ghuri. On the left side at the low end of the façade you will find sabil-kuttab. The mosque unit, above some storage rooms, is up another flight of stairs.

The plan of the interior follows late Mamluk madrasa-mosque style. The original roofing of the sahn is now missing. The shallow dome on pendentives in the qibla liwan is unusual, but the lavishly carved surfaces are not. The mausoleum to the right of the quibla is preceded by a small vestibule in which the Quran was recited for the patron’s soul. There is a good view of the city from the minaret. This complex was once restored in 1895.