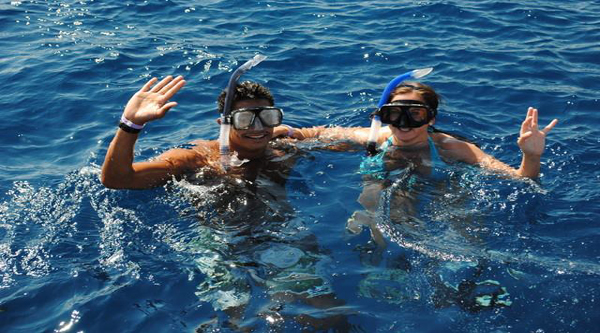 Egypt has a arid desert climate. It is hot or very hot during the day, especially in spring-summer period. Temperature reaches +45 C in South, Sharm el Sheikh or Marsa Alam during the day and in the evening almost the same just without the sun. Such weather remains from end of April until end of October.
In Cairo or to the north, it is milder and remains hot not that long, by the end of September weather in Cairo becomes very nice, especially in the evening around +25C and if you go to the Nile fresh breeze from the river will make your evening just as nice as you want it to be.

In Sharm el Sheikh the weather becomes nice from the end of October, all November, the best month in general to go to Egypt, you can really enjoy the weather while it is still possible to swim in the sea, but I do believe hotels pools will stay untouched already if not heated.

The weather in Sharm el Sheikh in general is very dried and hot, but very windy in winter in Nabq area.
But some days can come with a very high humidity so that it is impossible to go out, you become wet in no time. But this happens not that often, so most of the season you will enjoy with the weather and the sea.

As for winter usually it is nice, around 25C here in Sharm el Sheikh during the day but cooler in Cairo or Alexandria. It is also very rainy in winter in Egypt especially in Alexandria, sometimes can happen in Cairo and really rare in Sharm el Sheikh. But if it happens here in sharm el Sheikh or Sinai peninsula in general, that as a rule it will be a very heavy rain with flood, like in 2010.
In winter can be really cold at night in the desert or in mountain areas such as St Catherine and Mount Sinai . Snow can be shown over the mountains and temperature falls below zero before sunrise, so be prepared if you hike the mountain between November –April .

In spring almost for 1 month, as a rule in March, in Egypt, and Sharm el Sheikh as well, a hot and dry Khamsin wind blows. It really spoils nice weather of Sharm el Sheikh as days become not that sunny, sometimes cloudy and sandy wind can blow all the day. It is better to avoid this period and come to Egypt after when the weather is nice back April May if you like +45C.

Autumn is the best time to visit Egypt, still warm but already not hot, still possible to swim in the sea and you will not be burn during the day!
From October to end of November, sometimes mid December, depends on your luck the weather in Sharm can be over +30 during the day and +25C in the evening. Sometimes even in December weather can remain warm and nice around +30C during the day, but will be cold after sunset, can fall up to +15C, so always take warm clothing if planning a holiday in Egypt in winter period.