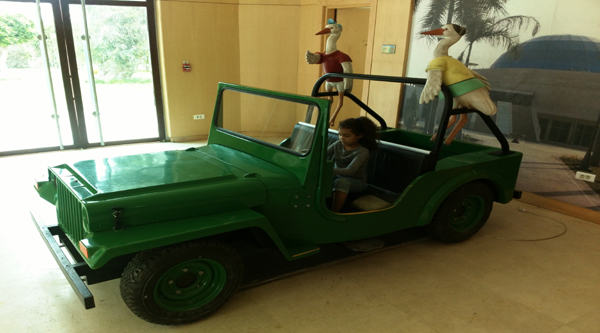 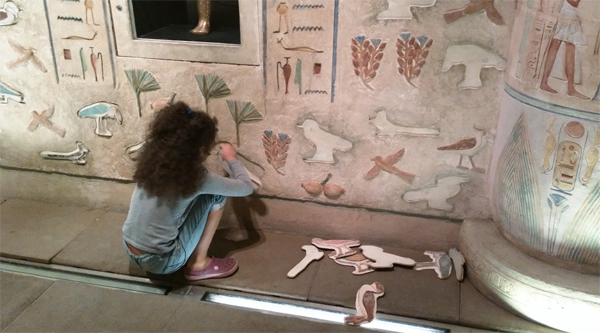 Decorating a wall with hieroglyphs. 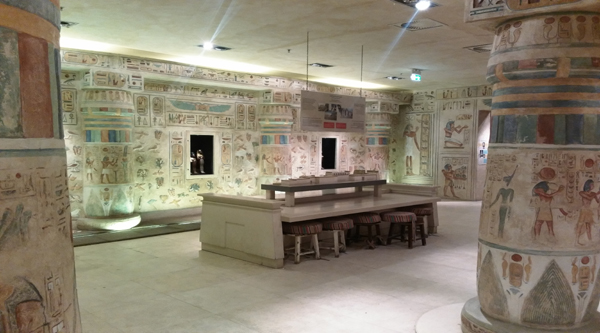 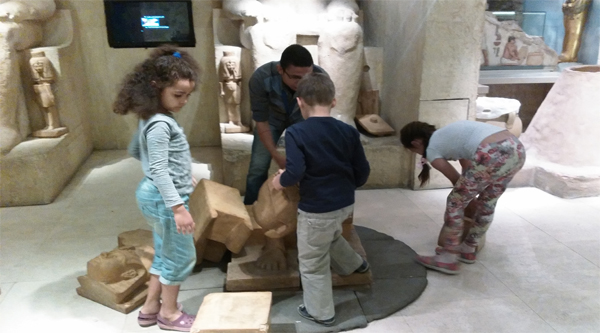 Constructing a statue of a pharaoh. 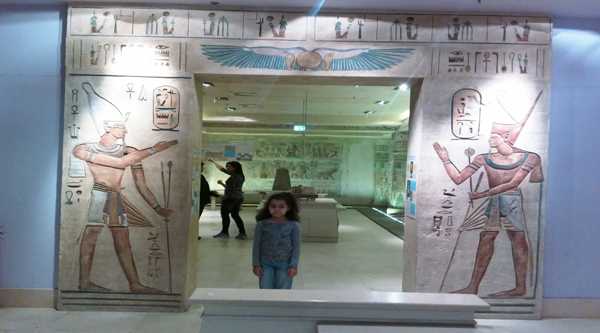 Inside the Egypt Hall. 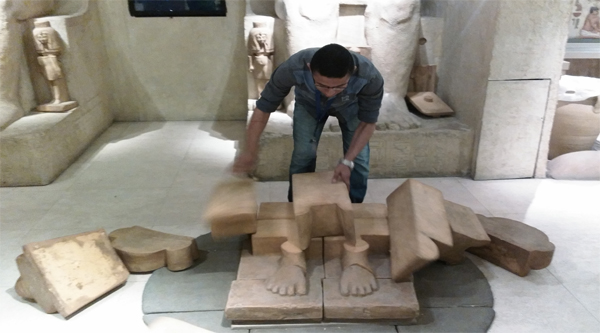 Making up a statue of a pharaoh. 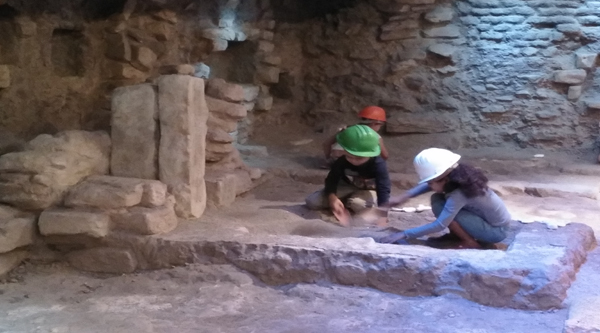 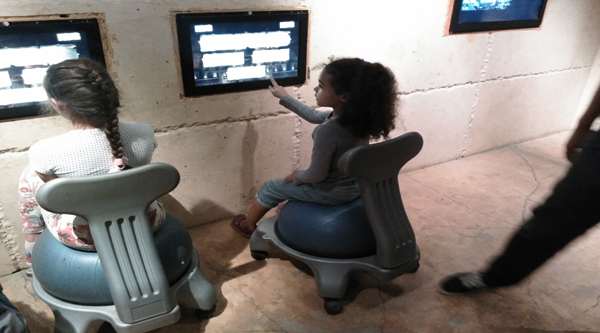 Room of passing the final quiz. 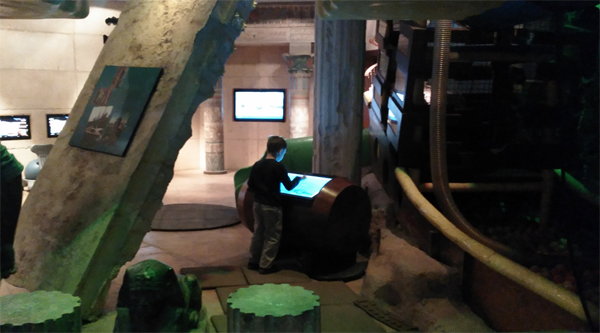 Some interactive games to understand the exposition. 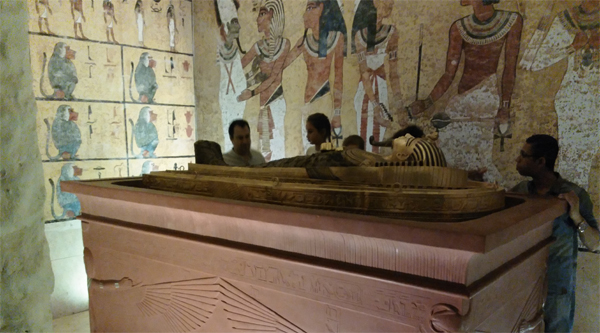 At the room of king Tut's tomb.

One of the room about history of Egypt. 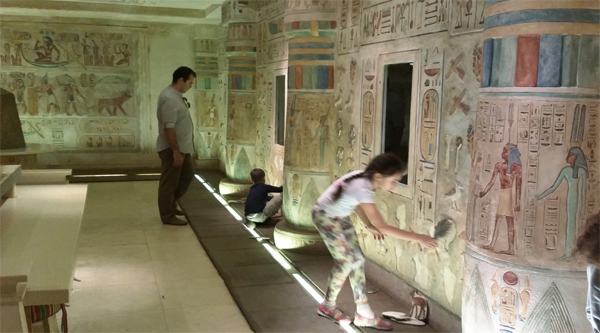 Some puzzle activity of the history.

This interactive museum is one of the few museums in Egypt totally dedicated to children to let them discover their land, culture and history through interactive displays, games and group activities.

Introduction to the museum

The award-winning Egyptian Children’s Museum in Heliopolis offers a journey through time, exploring the different facets of the country’s civilizations, history and natural resources. The Children’s Civilization and Creativity Center stands on Abu Bakr Al-Seddik Street in Heliopolis opposite the Haroun Al-Rashid tram station, its white modern architecture and large blue dome welcoming its child visitors.

Originally inaugurated in 1996 and covering some 4,000 square metres in a 14-feddan plot, the museum allows children to use all their senses to explore Egypt’s various civilizations, environments and natural resources. In 2008 the museum was closed for renovation and was then officially reopened in 2012. The new building was designed by experts from Egypt, the United Kingdom and the USA, advised by museum specialists from across the globe who contributed to the Museum by helping children and young adults to learn through hands-on exhibits, interactive displays, computer games and a spectacular dome exhibit that takes visitors through the history of science in Egypt. In May 2012, the CCCC won the United Kingdom’s Museum and Heritage International Award.

Visitors to the museum are welcomed by a spectacular Space Pyramidion, a metal structure of spheres circling a pyramid that represents Egypt’s ancient and modern cultures. The museum consists of four floors each connected to the other by a central spiral staircase known as the “time stairs” that provides a path from the roof to the basement and crosses four themes. Visitors can actually choose what to visit but a guide is required as many multimedia is involved in the process as well as the guide will interact with children and show them how to use the exhibits in the correct way. As English speaking guides are not that many you will have to wait for him as he might be busy with another group. Since the tour of one floor takes around one hour, to make your waiting time more comfortable there is a safe playground for children where they can enjoy while waiting and you can have a seat on a bench in a shadow of the garden trees.

The 1st floor exposition begins with a journey down the Nile Valley and through time that shows how the Nile has changed and has formed the landscape of modern Egypt. The journey starts at a fountain symbolizing the source of the Nile in Nubia, the rocks here being carved with images of the dinosaurs that once roamed in this area in prehistoric times. The journey then passes to another stage when the Nile Valley started to dry out, Egypt becoming savannah grassland and semi-arid desert. Lions, giraffes and gazelles appear along the Nile’s banks. The journey continues until visitors reach the Ancient Egyptian period, the land surrounding the Nile Valley by then having become desert. An oasis is on display, as is a desert encampment. Foxes and camels, the wildlife of the period, are also shown. The Nile’s path then takes the visitor to the medieval period, after showing the development of mechanized water systems in the Roman period. The use of the Archimedes screw, a form of water transport, helped to produce large-scale farming, and it was the agricultural surplus from this that supported the civilizations of Greece, Rome and finally Byzantium and the Arab Empire, these helping to create Egypt’s characteristic field system and large canals.

The basement floor addresses the theme of “where are you”, in which children can explore Egypt’s ancient history through a tour around the Giza Pyramids and a replica of King Tutankhamun’s tomb. It also shows visitors the arts and life styles of the ancient Egyptians through photographs and replicas of temples and obelisks. Children learn how the ancient Egyptians used to count, write and read, as well as the instruments they used. This section also introduces visitors to how modern technology has helped restore the monuments of the period and how it has helped discover more of its secrets. This is shown through the presentation of a mummy and of underwater archaeology in Alexandria. Children will experience the Ancient history of Egypt, will get to know how the pyramids were built. 3D presentation by Zahi Hawas will tell the story of building the pyramids, how the tomb of Tutankhamon was discovered by Carter, how the process of mummification was applied. Children can interact with the exhibits, made in the way of puzzles, can draw their own hieroglyphs and become real archeologists. The tour finishes with a computer quest so children can check what they learned during the tour.

The ground floor is dedicated to the theme of “who are you, child of the Nile”, in which children are able to discover the development of Egyptian civilization by looking at the flooding, sowing and harvesting of crops in the Nile Valley. Egyptian markets and houses are also shown. The first floor theme is “where are you now”, and this shows the development of modern Egypt through a panorama of Egyptian landscapes and environmental issues, indicating how today’s population is helping to make the country a better place to live in. The different kinds of desert in Egypt are shown, as are the country’s diverse populations and environments.

To reach the second and upper floors of the museum visitors use the time stairs that take them on a journey to the stars. This staircase celebrates mankind’s journey of exploration from the past to the present and into the future. In the center of the display is the earth, with the planets shown around it. Visitors move up and down the double stair and ramp winding through the void, much like humanity’s journey back and forwards in time.

Finally, the museum’s second-floor display takes as its theme the question of “what will the future hold”, this looking at the history of science in Egypt through both a static and a hands-on exhibition that presents stars, ships, astrolabes, telescopes, airplanes and space travel. There is also an immersive “4D experience” dome show, in which the pioneers of science in Egypt reappear to tell the history of science and to encourage the young visitors to participate in it in the future.

The path leading through the museum ends in the Delta landscape, Alexandria and a covered Roman theater for outdoor performances. It passes through a shady garden of mature trees that both calms and stimulates the imagination of the visitor in anticipation of entering the new learning area of the museum.

The gardens have a living display area of birds, butterflies and fish, as well as an outdoor excavation area. A large cafeteria is also provided, as are outdoor classroom spaces for creative and musical activities. The cinema provides 3D projection facilities, while the museum’s bookshop is stocked with educational books.