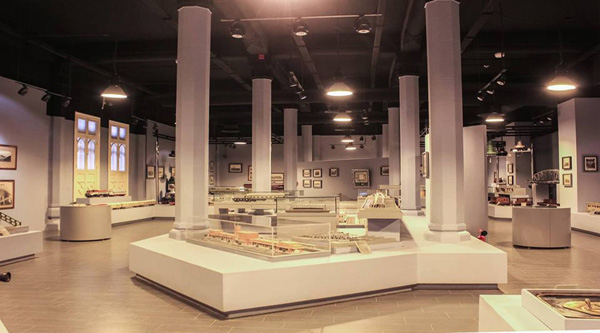 Newly renewed and recently reopened museum is dedicated to the development of railways in Egypt and movements around the country.

The interest in establishing this museum came in the early 1930s when Egypt hosted the International Railway Conference. The museum, claiming to be the 1st one of its kind in the area, opened to guests and members of the conference on January 15, 1933. The 1st attractions of the museum upon entering it are 2 authentic locomotives to the right. The first locomotive is sectioned through the center to demonstrate the interval working parts of an engine and how coal was used as fuel. The original royal engine of Said Pasha, a gift from the French queen Eugenie in 1862 is exhibited in the museum as well. The engine is decorated with arabesques and the cab has leather sofas & brass fittings. You can climb into this marvelous engine, explore it & touch. The rest of the 1st floor is devoted to old & new signaling devices. There are old telephones, telegraph equipment, and lots of flashing lights, bells & movable parts to keep your attention. Also you will find models of different types of bridges & railway construction used in old and new railway stations in other countries.

Upstairs you will find out how ancient Egyptians moved the monuments & the Greeks and Romans used transportation. Also you will find an elaborate toy train that was owned by a rich cotton merchant, Farghali Pasha, and confiscated during 1952 Revolution.

And a big surprise is waiting for you outside the museum to the left – a large warehouse exhibits the 1st locomotive to run in Egypt in 1854. Do not forget to climb into this old engine to get a really unique experience.

The museum is a two-storey building displaying more than 700 kinds of train models in addition to a collection of statistical documents and maps that demonstrate the development of transportation in Egypt over the decades.

The museum consists of five sections covering the history of railways. The first section is transportation before steam engines, including means of transport in ancient Egypt. The section features Model boats and horse-drawn chariots and wagons that pharaohs used in everyday life and in wars. The second section is dedicated to the development of rail wagons to modern trains. A bridges section contains models of all railway bridges in Egypt, and features paintings and pictures depicting the bridges and their design. The airplane section gives a brief history of the development of airplanes from the Wright brothers till today.