Solar boat museum at the bottom of the Pyramids 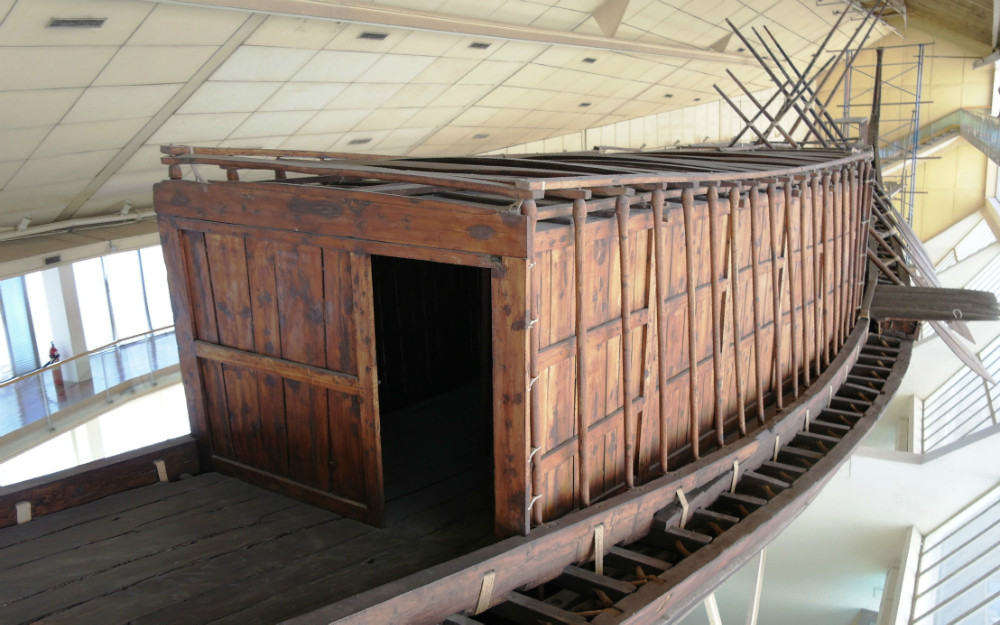 Guide tour to the Solar boat museum, this pavilion is located on Giza plateau at the Great Pyramid of Cheops and hosts one of the major discovery every done in Egypt - Khufu Solar boat.

Built in the shadow of the Great Pyramid at Giza, the Khufu Boat Museum houses the largest royal vessel ever found in Egypt. Discovered in 1954, this boat had been dismantled in ancient times and placed in a pit to the south of the pyramid. A second boat still lies in a similar pit directly to the west of the first pit. Scholars are divided over whether these boats were symbolic solar barks for the king to use in his afterlife, or funeral boats, used to transport Khufu's funerary equipment to his pyramid.

Ancient Egyptians used to bury a "solar barge" near the tomb of their pharaoh because they believed that their ruler needed transportation in the afterlife. In May 1954, the Egyptian archeologist Kamal el Mallak brought to light, after almost 5000 years, a "solar boat", to the south of the pyramid of Khufu (Cheops). The parts of a cedar-wood barge were found in five pits near the Great Pyramid of Khufu. Perhaps the very bark which had accompanied the body of the pharaoh to Giza. In cedar, sycamore and jujube wood, the vessel is 46 meters long and about six meters wide in the middle and terminates fore and aft in papyrus-shaped poles. A covered cabin about nine meters long is at the centre of the boat, which also had six pairs of oars.

The barge was restored and assembled out of 1200 pieces of wood and is displayed, since then, in a glass museum near the Great Pyramid in Giza. Reconstructed over the course of 13 years of work, the boat dominates the interior of the museum. Ramps and stairs allow the visitor to see the boat from various angles and at different levels. The museum's display also includes photographs of the excavation and restoration of the boat as well as samples of ancient rope and other boat-related materials.