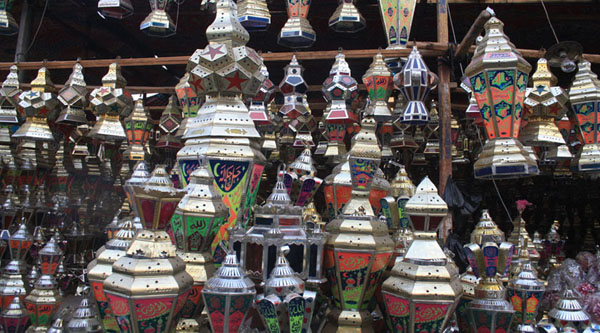 Spending the holy month of Ramadan in Egypt especially in Cairo is different than elsewhere. Other than the rituals practised during that month, certain social habits of Egyptian Muslims are much different than anywhere else.
Ramadan is a month that follows the lunar calendar, the basis of Islamic (or Hijri) calendar. With an eleven-days difference than the Gregorian, the exact timing of Ramadan during the year becomes variable, sometimes falling in summer and sometimes in winter. The first day of Ramadan is also variable, since "Sha'aban", the preceding month, sometimes comes in 29 days and sometimes in 30.

Astronomical calculations are utilised to detect the birth of the moon, yet the cornerstone remains to be its visualisation after sunset. Ramadan lasts for 29 or 30 days, as most lunar months. The holiness of this month comes from the fact that it hallmarked the day when the Holy Spirit - Gabriel started the transmission of God's message to prophet Mohammad, 14 centuries ago. The exact date has never been identified, but believed to be on one of the last 10 days of this month, which Moslems call "Lailat el-Qadr". According to Islam the month is dedicated to prayers, as it is believed that it is an occasion to wipe one's sins and enjoy God's unlimited mercy.

The principal ritual during Ramadan is fasting. This entails abandoning eating, drinking, smoking or sinning even if minor - throughout the whole day, from dawn to sunset. Though the usual daily practice is natural, Moslems prefer to spend more time praying or reading the Koran, particularly at night.

The daily meals become limited to two, the first of which is the "iftar" which is breaking the fasting that takes place immediately with sunset. The timing of the second meal - "sohour" - is variable according to personal preference, but usually delayed as much as possible until just before dawn. In between "iftar" and "sohour", people are allowed to eat liberally.