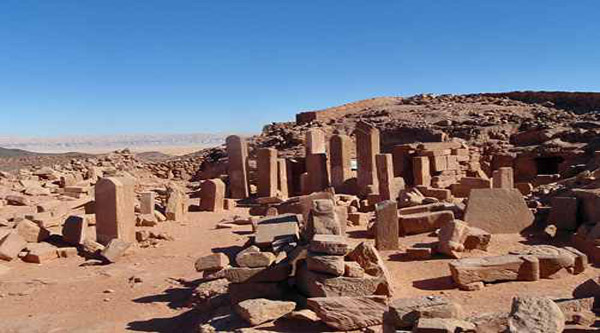 Serabit Al-Khadim is known not for the Temple of Hathor and the turquoise mines alone, but also because it was here that a mysterious script was found, a script that resembles hieroglyphics and appears to have evolved in Sinai.

Importance of Sinai to Pharaohs

The Ancient Egyptian kings went to Sinai for gold, turquoise and copper and the remains of their mines can still be seen. Just before Abu Zenima, a turn off the main road leads past the manganese mines to Serabil El Khadim. There are some abandoned turquoise mines and ruins of a rock cut temple of the 12th dynasty dedicated to the goddess Hathor who was known locally as the mistress of the turquoise. Pharaohs of later dynasties erected many stelaes which are still at the site commemorating their mining expeditions to Sinai.

The temple of Serabit el-Khadim is one of the most important temples of ancient Egypt. Sarabit means standing stones or the tools made of stones or the pestles, while el-khadim, means the servant or the guard. The temple represents the largest and most important Egyptian temple in the Sinai Peninsula, and is the oldest example of partially carved Egyptian temples in the rock and the holiest of this temple is the largest of its kind among all left by ancient miners throughout Egypt.

Location of the temple

The temple is located at an altitude of about 850 meters above sea level in the southwest of Sinai peninsula, about 10 kilometres north of Wadi Maghara, and about 43 kilometres to the east of Abu Zenima.

Serabit Al-Khadem is known for :

1. The Temple of Hathor
2. The Turquoise Mines
3. The Sinai Alphabet

The turquoise mines in Sinai

It was built in an area particularly rich in turquoise, a semi-precious stone much in demand by the Ancient Egyptians but of which there is no trace today. Although the earliest evidence of mining dates to an early period, it was not until the Middle Kingdom, especially between 1790 and 1778 BC, that a permanent Egyptian presence was established there. The Pharaoh Senusert developed the site of an earlier rock-hewn shrine known as the Cave of Hathor in which the miners may have placed a statue of their patron goddess. A portico and open court were constructed in front of it to form a temple, from which position rocky trails lead to several small turquoise mines. Naturally there was a residential area for the priesthood, and some of the inscriptions leave no doubt that miners themselves sometimes served as volunteer priests. Expeditions set out from Egypt every three or four years -- annually in times of special need for the precious stone - under the command of important officials, some of whom claimed to be "an acquaintance of the king".

The Temple of Hathor

The miners mounted rocky trails where they left graffiti of boats and hieroglyphic inscriptions some of which refer to the goddess Hathor as "the lady of the turquoise". They worked each mine rapidly, and when the source was exhausted went in search of new veins, but not before first making offerings to their patron goddess whose temple was successively enlarged and adorned. During the 18th Dynasty, in about 1580 BC, the barracks were enlarged and the Temple of Hathor received attention from Queen Hatshepsut and Tuthmose III. Its orientation was changed when another shrine, dedicated to Sopd, a god of the Eastern Desert, was added at its southern end. By this time the structure did not resemble a traditional Egyptian temple at all. Courts, pylons and some dozen chambers with roofs supported on pillars can be identified. This was a period of the greatest mining activity in Sinai, and because the Bedouins, who always resented the Egyptian presence, became more troublesome, a small Egyptian garrison was set up to keep watch over their movements. Why the local community should have attacked the miners is difficult to say; perhaps it was for no more than a meagre booty. Nevertheless armed pursuits were made, and records of Egyptian successes were frequently presented in triumphal reliefs inscribed on the rocks - possibly exaggerated portrayals of fairly inconsequential incidents.

The mines around Serabit Al-Khadem

The mines around Serabit Al-Khadem, along with the now destroyed mines of Wadi Maghera, represented Egypt 's main source of this popular stone, and mining was clearly an arduous task. The men had to crawl through narrow horizontal openings at ground level. The larger, grander mines could hold about 50 workers and in the hot months conditions were almost unbearable, as was described in a text dating from the 12th-Dynasty reign of Amenemhet III. One of his officials was almost in despair when he experienced a desert that " ...burned like summer, the mountain was on fire... ", but, he continued, he fortunately survived and recorded that his mission was successful. When Flinders Petrie studied the temple in 1905 he removed many of the smaller stelae and statues; deciding to leave only the larger stelae in situ.

It was found by The British scientist Petri in 1905 12 inscriptions represent some tools of daily life previously unknown signs, some of which resemble hieroglyphs, and were dated to both Tuthmosis the Third and Hatshepsut. In the following years, more than one expedition worked in the area, where other inscriptions were found, bringing the total number to 25.

it was a mysterious, a script that resembles hieroglyphics and appears to have evolved in Sinai. British archaeologist Flinders Petrie concluded that it was invented by a Semite who worked in the turquoise mines in about 1400 BC, using a linear script on the hieroglyphic model. His compatriot, the linguist Sir Alan Gardiner, noted the remarkable fact that at least six of the signs presented appearances that unmistakably corresponded to the meanings of letter-names belonging to the Hebrew and Greek alphabets. Even more convincing of cultural overlapping, one group of four letters -repeated several times - could read as Ba'alat or 'the mistress', the female Ba'al, the name inevitably given by Semites to the Egyptian goddess Hathor. This confirmed that the inventor was a Semite who actually worked in the turquoise mines.

To the west of the temple located the workers' houses, which are circular in shape roughly constructed from the stones of the area. It found some tools of daily life. The English scientist Petri 1905 found 12 inscriptions with previously unknown signs, some of which resemble hieroglyphs, and were dated to both Tuthmosis the Third and Hatshepsut. In the following years, more than one expedition worked in the area, where other inscriptions were found, bringing the total number to 25. The researchers called these signs, the Sinai alphabet. It turned out that these marks are centered on ancient Egyptian marks, influenced by some Semitic writings as Sinai was a meeting point for those coming from Asia and it seems that some of the Semitic workers were coming to this area of ​​Palestine for work or trade. It became clear after further studies that this writing is the origin of the Phoenician alphabet, which is the origin of the Greek alphabet

The temple has three entrances to which the visitor arrives from three valleys.
The main entrance included two paintings, one from the reign of King Ramesses the Second, and the other from the reign of King Nect. . Despite the fact that the name of Amenemhat I, the founder of the Twelfth Dynasty, precedes all the names of kings found in the ruins of Serabit al-Khadim, the work in Serabit al-Khadim, both for the extraction of minerals and the construction of the temple, did not begin before the reign of his son King Senusert I (1981 - 1875 BC).

The temple covers an area of more than 2,800 square meters, the temple is about 80 meters long, and about 35 meters wide. The temple contains 387 inscriptions.