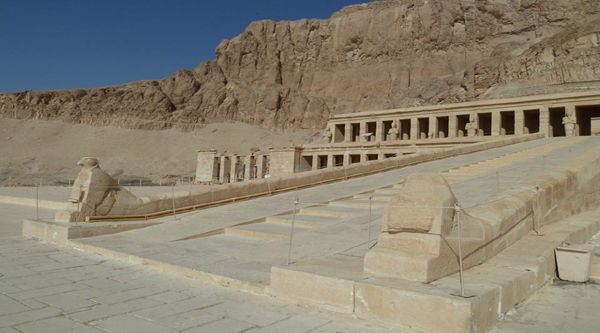 God Horus at the bottom of Hatshepsut temple. 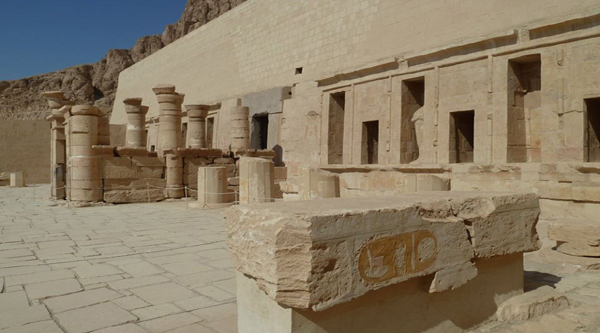 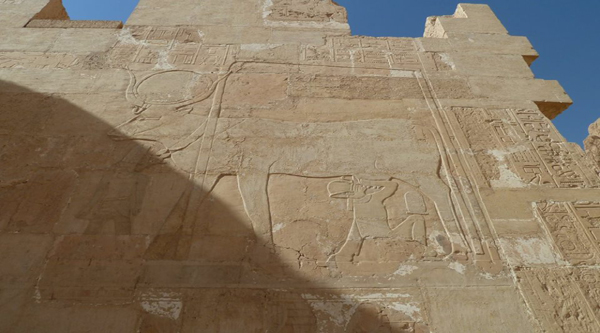 Picture of Lion on the temple's wallStatue of god Horus. 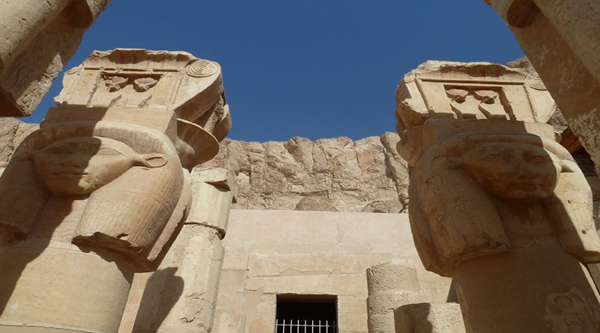 Goddess Hathor depicted as a cow. 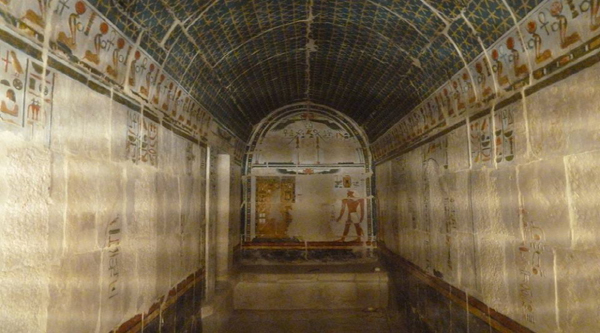 Hathor Headed columns of the temple. 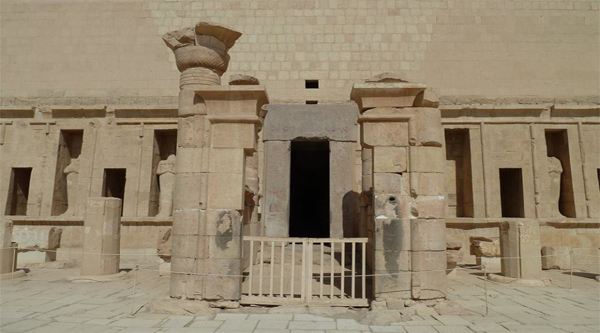 Hall of the bark of the temple. 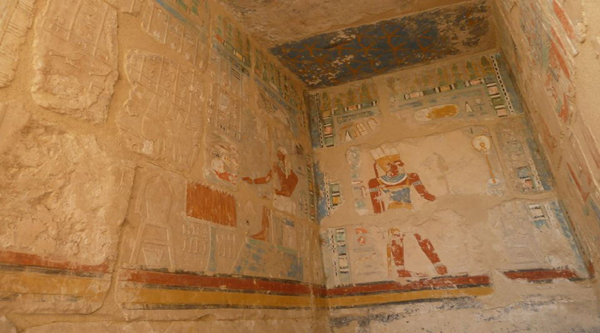 A beautiful rock-hewn temple at Deir el-Bahari belongs to a woman pharaoh known as Queen Hatshepsut. The complex in the natural rock amphitheater is made up of three enormous terraced temples erected over the course of 500 years.

The Queen Hatshepsut temple at Deir el-Bahari belongs to a woman Pharaoh Queen. For the 1st time the name Deir el-Bahari was employed by Wilkinson in his work on "The Topography of Thebes", London 1835. In the 1st half of the 19th century Deir el-Bahari had already been the subject of investigations by Champollion & Lepsius. A century and a half ago Mariette conducted the 1st regular excavation here, the Temple of Hatshipsut was unearthed and even since the name of Deir el-Bahari has been applied to this monument. Between 1962-68 the Polish-Egyptian mission discovered and explored the Temple of Tuthmose III at the same location.

Both temples were destroyed by an earthquake and covered with rocks & rubbish fallen from the cliff, but from the very discovery it was clear that the uncovered building is an architectural masterpiece and one of the most outstanding monuments of world cultural heritage. The complex facade of the Coronation Portico, the walls, columns and architraves of Upper Courtyard, the Sanctuary of Amun, and the reconstructed Osiride figures have been executed partly in new stone and partly using the decorated or inscribed pieces remounted in their original position. As some scenes have only partly been preserved, the outlines of figures are carved in the artificial stone surface, to make them clear and understandable to visitors. The Bark Hall now appears in its true and clean colors as well as walls of the Main Sanctuary and the Upper Courtyard, the granite portals, architraves and other elements.

The architectural complex in the natural rock amphitheater at Deir el-Bahari is made up of three enormous terraced temples erected over the course of 500 years by Nebhepetre Mentuhotep (2061-2010 BC), Hatshepsup (1473-1458 BC) & Thutmose III (1479-1425 BC). The temple, built of blocks from the local limestone quarries, is breathtaking in the way the architecture dominates the valley, while blending harmoniously with the mountain backdrop.

The temple consists of the Central court where Hatshepsut planted the incense trees that were imported in small tubs from the Land of Punt. Punt Colonnade to the left commemorates the expedition of the Queen to Punt, on the Somali cost. The corresponding colonnade to the right is the Birth colonnade that records Hatshepsut's divine birth. To the left of the Punt colonnade we will find Shrine of Hathor. And to the right of the Birth colonnade lies well preserved Shrine of Anubis. On the Upper Court you will find open-roofed chamber to the right, it is an ancient altar for the cult of Ra, the Sun-god. To the left is a sacrificial hall. The Sanctuary is hewn out of the natural rock and comprises two chambers with large recesses to the sides.