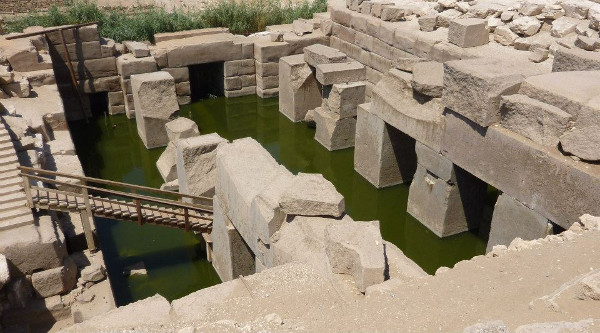 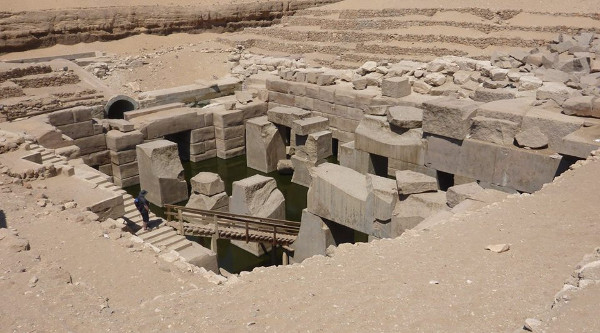 This building adjacent to the western wall of the temple of Seti I in Abydos is an integral part of the burial complex of Seti I. Osirion was discovered by archaeologists Flinders Pitry and Margaret Murray, who excavated the site from 1902-1903. Osirion was cleared of sand only in 1914.

Osirion, a separated building that lays behind the temple of Seti I to the southwest. The structure is only 26 feet behind the seven sanctuaries and Osiris chamber.  It lies on the axis of the temple but is on a lower level. The purpose of Osirion is unclear while its architectural features are unique.

It was discovered in 1903 by M. A. Murray, and was partly excavated in 1911-1914 and 1925-1926 by the Egypt Exploration Society. At firts it was thought that Siti I had constructed a cenotaph for himself since his name appeares on some parts of the building.

The Osirion is sunk into a depression on a level with the water table. The central hall is surrounded by ditches around which are 17 rock-hewn niches, in front of each was a ledge. The central hall is approached from east and west down a narrow flight of stairs, then led up from the channel of water to the "island" at the center. The main part of the structure was built by Seti I and was completed by Merenptah, son of Ramses II.

Originally this curious structure was roofed, and its only entrance was at the end of a long passage running south from the bottom of a pit outside the northern wall of the temple of Seti. Visitors now descend modern steps and enter directly into the central hall.

The central portion of the hall is a massive island of sandstone masonry containing ten rectangular red-granite pillars. Each pillar is 8,5 feet in diameter. These originally supported architraves and roofing-blocks. Each roofingblock is 6 feet thick. The island was probably cut off from the rest of the building when the trench was filled with water.