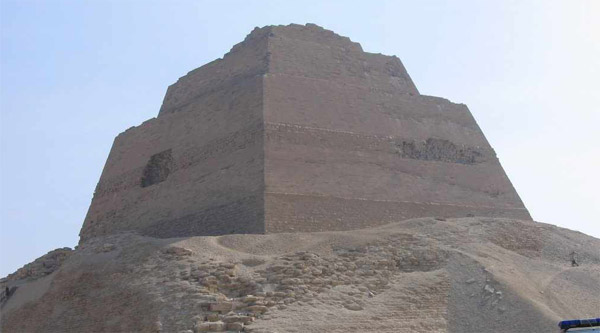 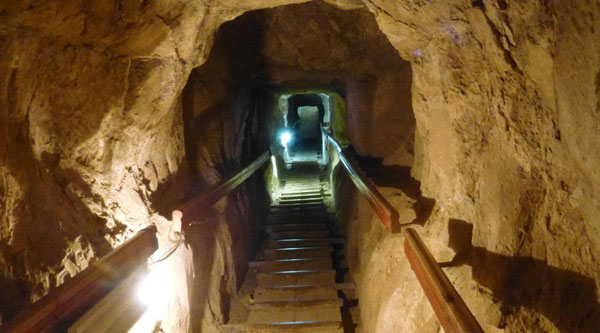 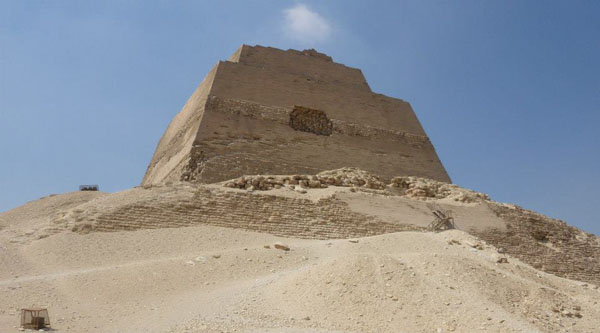 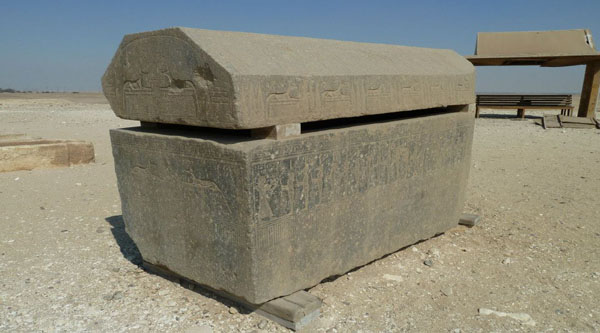 Type Pyramids tour
Open 08:00 AM - 04:00 PM daily
Photography Not allowed inside the pyramid

Built by the pharaoh Snefru, the Father of Khufu, the pyramid of Maidum seems to stand alone on the edge of the desert, close to several smaller mastabas. The eight layers structure is believed to be the first attempt at a true pyramid and it is the first Egyptian pyramid to have an above ground burial chamber with beautiful and innovative arch-shaped walls. Somewhere in its history this pyramid suffered a terrible collapse. Its heavy outer layers eventually slid downwards, leaving a square, three-stepped core standing in a mountain of sand and rubble and the ruins of the pyramid complex. We do not know when this disaster occurred, although as there are New Kingdom tombs incorporated in the rubble we know that the pyramid had at least partially collapsed by the time of the New Kingdom (which started around 1550 BC). Nowadays, you can only see the highest three levels of the pyramid, protruding through the sands and collapsed debris, in an aura of strength.
The pyramid at Meidum is one of three constructed during the reign of Sneferu, and is believed by some to have been started by that pharaoh's father and predecessor, Huni. However, that attribution is uncertain, as no record of Huni's name has been found at the site. Sneferu was never buried in this pyramid, even through a large cemetery with the tombs of members of the ruling family was established around it.

The Meidum pyramid consists of large mud-break mastabas. The architect who continued Meidum construction was the successor to well-known ancient Egyptian architect Imhotep, who built the Djoser step pyramid. However, the modification made Imotep’s design and attempts to extend the structure led to its partial collapse.
The Arab historian Al-Maqrizi described the Meidum pyramid during his visit to Egypt in the 15th century AD, as “looking like a five-stepped mountain.” However, in 1788 during Napoleon Bonaparte’s expedition to Egypt, French explorers observed only three of its mastabas.
The unusual appearance of Meidum pyramid led to Beni Suef inhabitants calling it Al-Haram Al-Kadam (Pseudo Pyramid). The Meidum pyramid originally consisted of several mastabas connected to each other to give it the pyramid shape, the ancient Egyptians filled the gaps between every mastaba with limestone casing.
During the 19th century British Egyptologist Flinders Pertrie, succeeded in locating the ruins of the pyramid’s mortuary temple. The temple is 65 metres high, and its entrance is aligned north-south, with the entrance in the north, 20 metres above present ground level. The steep descending 57 metre-passage leads to another horizontal passage, just below the original ground level that then leads to a vertical shaft 10 metres high which finishes at the corbelled burial chamber itself. The chamber is unlikely to have been used for any burials.
Neighbouring the pyramid complex is the mastaba tomb of an unknown noble. It has a spacious burial chamber and hallway, and contains the first example of a red granite sarcophagus.
The Meidum Geese was found in the mastaba tomb of Pharaoh Sneferu’s son Nefermaat, located near the Meidum Pyramid. It was discovered in 1871 by Luigi Vassalli, who cut the painting off the wall. At present it is on display at The Egyptian Museum in central Cairo. The painting, which depicts white-fronted geese, bean geese, and red-fronted geese, is considered by many Egyptologists to be a masterpiece of ancient Egyptian art.
The last ruler of the 3rd Dynasty Huni, has sometimes been credited with initiating the building but archeological finds have shown that is was the work of the 4th Dynasty ruler Sneferu. Sneferu probably selected the site for the pyramid with a view to its strategic significance in the Nile valley near to the entrance of Fayoum Oasis. The pyramid was built 1st in seven and later in eight steps. For reasons that are not quite clear it was decided to change it into what is called a true pyramid.