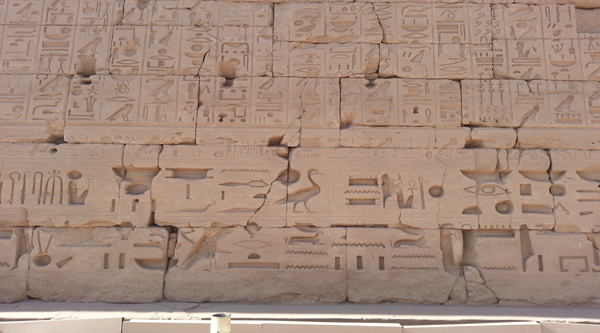 Development of Egyptian dialect from hierogliphic to coptict and modern Arabic language.

The Greeks called the Egyptian writing “hieroglyphs” which means "secret pictures in stone". The Egyptian language is not like ours, it is written with no vowels, no capital letters and punctuation. Depending on the way the signs are facing it may be read left to right, right to left or top to bottom. The hieroglyphic script consists of approximately 700 different signs which can be divided into two main classes: phonograms and ideograms. Phonograms represent consonants or group of two or three consonants eg. Ideograms represent the meaning of the word pictorially thus …… represents the sun or almost any word associated with the sun such as brightness, to shine, daylight etc. A word written in hieroglyphs often consists of the same consonants followed by a picture which helps to define the meaning. The picture is necessary because without vowels the meaning of a word is confusing. For example in English "CT" can mean cat or cut but "CT" with picture makes the meaning quite clear.

The meaning of Hieroglyphics

On the walls and columns of Karnak and at Dendera Champollion was delighted to find that he could read the inscriptions easily. Many men before him had tried and failed to decipher the lovely hieroglyphics - a word that means “sacred carvings”. Some scholars had believed that they were a kind of picture code, mostly about eyeballs and wavy lines, beetles, bumblebees and birds.

There was much confusion about the meaning of the hieroglyphics. Some scholars decided that the Egyptians were colonists from ancient China. Other scholars concluded the opposite. Many false translations were published. The Rosetta stone had been uncovered in 1799 by a French soldier working In the Nile Delta town of Rashid, which the Europeans called Rosetta. It was a piece of stone from an ancient temple, displaying what seemed to be the same message in three different languages: in hieroglyphics at the top, in demotic (a simplified style of hieroglyphics) in the middle and in Greek (the key to the translation) at the bottom. Champollion, who was fluent in ancient Greek read that the stone had been made to commemorate the coronation of Ptolemy V Epiphanes. In the spring of the new year 196 B.C. On this occasion the king released political prisoners, remitted taxes, gave money to temples and increased the size of the army .

The Greek text mentions Ptolemy many times. In almost the same positions in the hieroglyphic text is a set of symbols surrounded by an oval or cartouche. Champollion reasoned that this probably also meant Ptolemy. If so the writing could not be fundamentally pictographic; most of the symbols must state for letters or syllables. Champollion also counted up the number of Greek words and the number of hieroglyphs in the equivalent texts. There were fewer of the Greek words, which suggested that the hieroglyphs were mainly letters and syllables .

But which hieroglyphs corresponded to which letters?

Fortunately, Champollion had an obelisk from Philae that included the hieroglyphics for the name of 'Cleopatra.' The two cartouches for 'Ptolemy' and for “Cleopatra” were compared. 'Ptolemy' begins with a "P': the first symbol in the cartouche is a square. 'Cleopatra' has a 'P' for its fifth letter - the same square. The fourth letter in 'Ptolemy is an 'L' which is represented by a lion. The second letter of 'Cleopatra' is also an 'L'. and here is the lion again. The eagle is an ' A', appear twice in "Cleopatra. A clear pattern emerges. Egyptian hieroglyphics are a simple substitution code. But not every hieroglyph is a letter or syllable, some ARE pictograph .

The end of the “Ptolemy” cartouche means “ever-living, beloved of the god Ptah". The semicircle and egg at the end of ‘Cleopatra' are a conventional ideogram for "daughter of Isls”. This mixture of letters and pictographs caused much confusion for earlier Interpreters . It sounds almost easy, but it had taken many centuries to figure it out and there was a great deal more to do especially in the decipherment of the hieroglyphs of much earlier times. The cartouches were the key within the key .

It was extremely complicated and difficult also to write. Later, two simpler more cursive scripts developed. They were called hieratic (by dynasty V in the Old Kingdom) and demotic (by 700 B.C.) which were used for daily affairs. Formal hieroglyphic was reserved for monumental inscriptions.The latest form of Egyptian language was script of Egyptian Christians (Coptic). It seems to have been a rather onomatopoetic language. The word for donkey (Coptic …) must have sounded rather "eeyore" while ……. "miw" spells cat.

The Coptic language, moreover, is the same as the ancient' Egyptians but in the late form spoken by the inhabitants of Egypt throughout the first centuries of the Christian era. However, Coptic, when written used the letters of the Greek alphabet, for the Egyptians when they adopted Christianity, exchanged their old picture, symbols for a modified Greek alphabet, to which they added seven letters borrowed from their own Demotic (old popular writing), to denote seven sounds non existent in Greek. The Egyptians resorted to the Greek alphabet because their native Demotic, which represented the last stage in the development of hieroglyphic writing, was extremely difficult and complicated, whereas Greek was much easier. Moreover, Greek was, at that time, well-known in Egypt and widely spread, at least among the upper and middle classes.

The complete prevalence of Coptic language

The complete prevalence of Coptic was prevented by two main factors. Firstly, Coptic was never the official nor the only language of the country. Secondly, it did not thrive for long. It had a very short life indeed, for Greek was the language of the government and the educated classes alike throughout the Graeco-Roman and the Byzantine epochs. While the use of the old national language was restricted to affairs of the Church, to religious teaching and sermons, and to the ordinary conversations and commercial transactions of the common people. It is to be noted that Coptic flourished in a certain measure after the Arab conquest of Egypt, but not for long, for Arabic gradually replaced it. The 11th century, or thereabouts marks the end of intellectual and literary creation in Coptic, the language there after surviving only in the Coptic Church, where it is used in its liturgy.