Anemone of the Red Sea 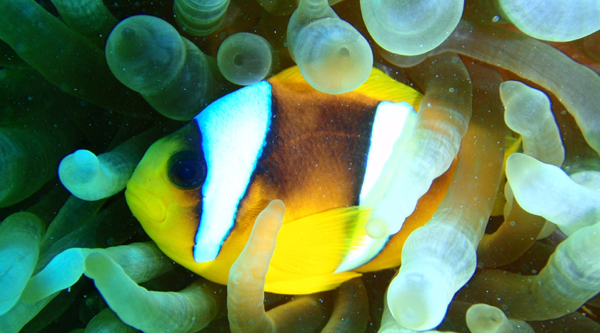 Anemone is not a flower but an animal that puts down a root, but also has the capability to up root and move on. This unique kind of animal is still found in vicinity of Sharm el Sheikh but already under risk.

It was noticed a few months ago that the Anemone had changed its shape and appeared far more open just like its cousin the Dahlia Anemone. The anemone had moved deep inside a hole in the reef where its tentacles were now tightly bunched and not fully open as it had been previously (Jackson reef).

This has also happened to the red Anemone that resides on Ras Nazrani. Yes, the Ras Nazrani Anemone is also still there and has moved back deep into the reef, just like the one at Jackson, glowing like red radioactive material from inside its hole in the reef.

What is the reason why the Anemone is in hiding? The Anemone at Ras Nazrai was always more sheltered than the one at Jackson and had far more protection from the reef around it, but it is still acting in the same manner. The Anemone will move its location if threatened by one of its predators. Do they see people as one? Is it a natural cycle? Or are they waiting for a new clown fish to occupy their tentacles due to natural death of their symbiotic pals?

The sea Anemone has a foot that in most cases attaches itself to the strata or in the sand. Although not a plant and therefore incapable of photosynthesis themselves, many Anemones form an important facultative symbiotic relationship with certain single-celled green algae species which reside in the animals gastrodermal cells. These algae may be either zooxanthellae, zoochlorellae or both. It's the zoochlorellae that are responsible for the greenish colour of the Anemones tentacles. A few Anemones are parasitic to marine organisms. Anemones tend to stay in the same spot until conditions become unsuitable or a predator is attacking them. In the case of an attack, Anemones can release themselves from substrate and swim away to new location using flexing motions.