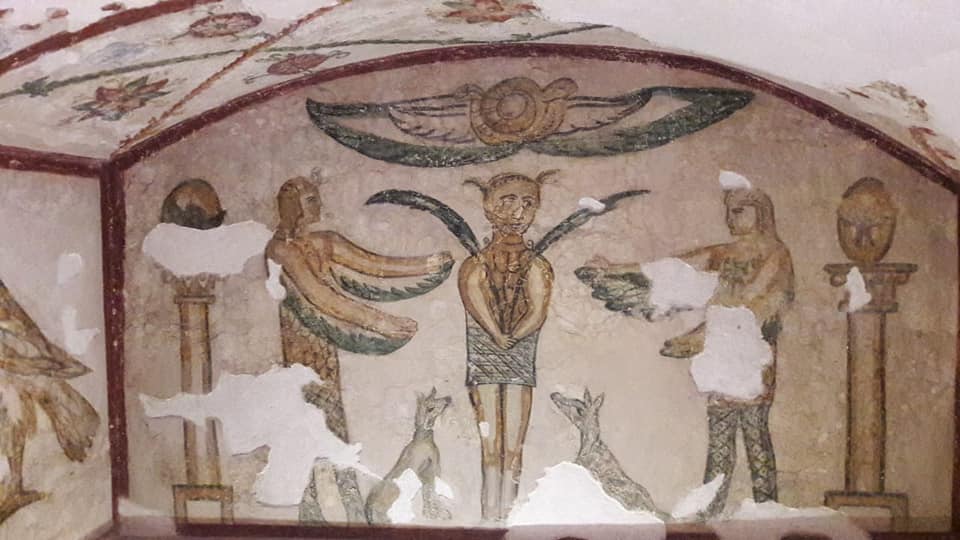 In the garden of Kom al-Shukafa site certain architectural fragments and sarcophagi from excavations in and around Alexandria have been placed, and three small tombs have been reconstructed. The most interesting is housed in a greyish building across from the Curators' House and is called The Tigrane Tomb .

In the garden of Kom al-Shukafa site certain architectural fragments and sarcophagi from excavations in and around Alexandria have been placed, and three small tombs have been reconstructed. The most interesting is housed in a greyish building across from the Curators' House and is called The Tigrane Tomb .

This tomb was discovered within the eastern necropolis of Alexandria on present day Port Said Street, formerly Tigrane Pasha, hence the name. It was unearthed by chance in 1952 during the digging of foundations for a modern building and became the subject of a difficult but ultimately successful rescue operation. It was a job well done and gives us the opportunity to visit a tomb contemporary with the complex of Kom el Shoqafa, and it provides a further example of the mix of Egyptian religiosity with the artistic expressions of classical culture.

On entering it is worth remembering that this was part of a greater necropolis, and one would have descended a staircase and passed by another painted chamber of loculi before being faced by the two Apis bulls and male figures that decorate the doorway. Inside are three sarcophagi disposed in the same way as in the chapel of Hypogeum but decorated with paintings rather than sculpted reliefs. Above the central sarcophagus is a familiar scene of the mummified Osiris lying on a bed, but a very Roman model, not the Egyptian lion-shaped bed. At either end, the sister goddesses Isis and Nephthys look on or one offers a pair of palm fronds, a later representation of the Feather of Truth. Behind each, a bird perches on a high pedestal painted to suggest alabaster. Above, a yellow solar disc with two urxi and vast green and red wings floats over a garland with ribbons. Anubis is, of course, present, sitting on the inside faces of the pilasters.

Osiris now dead, the right-hand recess shows us the resurrection. Isis, in a scaly costume, offers a couple of large feathers to her husband who rises towards her holding palm fronds. To his back, their son Horus holds a staff and altar. The large beri-bboned Easter egg on a column is of uncertain significance, and there is the usual winged disc with urxi. The side walls show a falcon wearing the crown of Lower Egypt and the forward panels have sphinxes and cobra goddesses.

The left-hand sarcophagus has the risen Osiris in full apotheosis. He stands in what might be the tattered remains of a mummy's bindings, clutching two palm fronds and facing outwards. The laurel on his head is so poorly drawn that he appears to have horns. To his right, his son Horus holds out winged arms in imitation of Isis on the left. Pair of Anubis dogs sit faithfully at his feet, and in either corner are the mysterious Easter eggs.