Sound and Light shows in Egypt 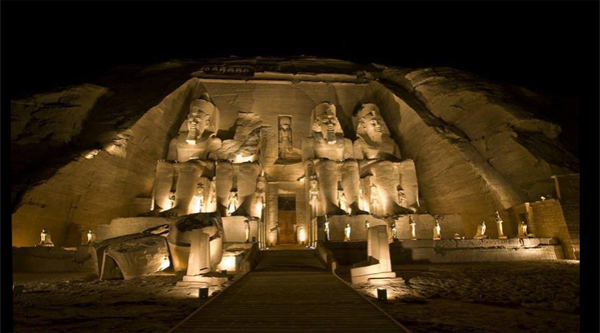 The spectacular Sound & Light shows you can experience almost at every historical place in Egypt. In Cairo at sunset you can visit the most famous show at the Pyramids of Giza. While the pyramids are step by step absorbed in the darkness Sound & Light show will bring them to life again, the history of the ancient civilization will reveal its mysteries to you on the day you visit the show.

Sound and Light show at the Pyramids is available in different languages, but the 1st show every day (starts usually at 07:30 pm, in summer later) is in English. You can also watch it in German or Italian once a week, Spanish, or French. All languages are available via headphones offer translation into English, French, German, Spanish, Italian, Russian, Japanese, Polish, Arabic or Chinese. Translation headsets are free.

In Luxor Sound & Light show at Karnak Temple will offer you a completely different experience! No sitting and watching, you will wonder around the ancient temple, following the voice who will lead you through the dramatic history of ancient Thebes. Pharaohs will arise to tell the story of their interesting lives, as haunting music will mysteriously flow through this ancient city. Ancient and poetic voices will tell you about the birth of Karnak Temple, the heroic achievements of pharaohs and god Amun.

The show is available daily from 07:00 pm to 10:00 (every one hour) on different languages, mainly on English, German and French but other languages like Japanese, Italian or Spanish are also available for groups from 10 people.

If you are in Aswan, do not miss to visit this tiny island and watch unforgettable Sound & Light show at island of Philae. Egyptian gods and goddesses will resurrect in front of your eyes to tell their life stories. The myth of Isis and Osiris comes to life through dazzling lights and capturing music, with sounds from the deepest bottoms of the ancient history.

The Sound and Light show at Abu Simbel will convey you to the time of the pharaohs. Enchanting you with melodious music, and bringing the ancient world to life around you, the show includes projections into the temples showing how they once looked. The program is presented every day at 07:00 pm in a number of languages (English, French, German, Italian, Spanish, Russian, Japanese and Arabic) with the provision of ear pieces. It is an experience not to be missed, one that will make your visit to Abu Simbel the memory of a lifetime.

If you are cruising the Nile, than a stop at Edfu to watch its Sound & Light show will be a nice surprise for you. This is one of the most magnificent Sound & light projects ever to be seen. The spectacular narrates the historical story of the temple, the legend of Horus (God of Edfu), and his annual journey with Hathor (goddess of Dandara). Also it tells us the struggle of Horus and his mother Isis against evil.

The spectaculars are presented by using the latest Sound and Light technology. For the first time video Projectors units with animated headers, which present (LED) lighting and high quality effects by using the best global technology are used here. The show runs every days, 3 times during the evening from 07:00 pm to 10:00 pm (every one hour) and is presented in six different languages (Arabic, English, French, Spanish, Italian, German). All languages are available through headphone with simultaneous translation as well.