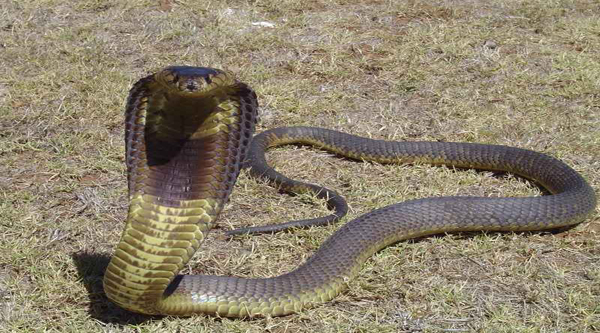 There are many different reptiles in Egypt, you can find Saw-Scaled Viper, Scorpions, rattlesnakes, Egyptian Cobra, Sand Boa and many Lizards, beside one of the most dangerous reptile - Nile crocodile.

There are many kinds of reptiles here in Egypt. I suppose one can't have a desert without snakes. For example the extremely dangerous Saw-Scaled Viper. Like its distant cousins, the rattlesnakes, the Saw-Scaled Viper warns all around of its coming. As it moves, the rough scales make a harsh rasping sound across the sand. When you hear this sound, it means you have to get away fast . Yet there are snakes quite useful so the Sand Boa is one of them. It's a fairly small non-venomous snake, only a couple of feet long, but it proves quite deadly to the rodent population.

Here's another creature we'd all like to avoid - scorpion . The tip of its tail delivers a powerful sting. The venom of most scorpions in Egypt is painful, but not deadly. However, the Palestinian Yellow Scorpion (thankfully rare) has a venom that is potentially lethal.

Today, the Nile crocodile, or crocodylus niloticus , is on the verge of extinction. No longer does it command the Nile waters. Instead, the crocodile has become the prize of ever-more stylised hunts. In the 1950s, professional hunters from around the world were given permission to come to Egypt and hunt crocodiles -- a lucrative business considering the high price fetched by crocodile skins. By the 1960s what remained of the crocodile population was dammed off in the newly created Lake Nasser by the building of the Aswan High Dam. The lake was a secluded habitat and the crocodile population has managed to make a small comeback, aided in large part by the naming of the area as an environmental protectorate.

The Nile crocodile, Naser lake's biggest resident, was actually on the verge of disappearing from Egypt , but when the lake was created its population bounced back. Today, and after more than 37 years since the High Dam's inauguration, unofficial census estimates the number of Nile crocodiles in Lake Nasser to be around the 70,000 figure; stunning to say the least. The second largest of the crocodilian family, the Nile crocodile is found throughout most of Africa 's mainland, south of the Sahara , as well as Madagascar . This giant reptile averages five metres in length with adult males weighing half a tonne on average. Infrequent recordings had exceptional males weighing up to a tonne. It is a beautiful creature, and believe it or not, it is an amazingly caring parent. Of all reptiles, only female crocodiles guard their eggs for the whole incubation period (in their case three months) with the father-to-be waiting nearby for the eggs to hatch. The parents will mercilessly attack any creature that gets too close. And if you think that crocodiles lose their edge when out of water, please think again. They can gallop as fast as a human being, so be extra careful when on shore so as not to disturb a parenting crocodile couple, especially in their nesting season: November to December in North Africa .

The role of the doting parents does not end here; once the hatchlings start emitting a high-pitched chirping noise before hatching, the mother heeds the calling and rips open the nest. Both parents carry their completely defenceless 30cm-long baby crocs in between their killer jaws and take them to the water. The newborns are a favourite snack of a number of marine animals, so the mother crocodile stays with her babies up to two years, when the babies grow to 1.2 metres in length, and start to be fine on their own.

It is important to note that saltwater and Nile crocodiles top the list of the most dangerous among the crocodilian family.

The crocodylus niloticus , has an invaluable place in the delicate ecosystem of Lake Nasser . The crocodiles feed on catfish and crabs, which in turn feed on bolty fish in the lake. They also consume dead animals, which helps keep the water from getting polluted. Crocodile waste is also known to be a source of minerals, which enriches the nutrition base for fish in the lake.

Found all over the world in various guises, the Agama lizard is a bit of a genetic throwback when compared to its modern day Iguana counterparts. Depending on their habitat they've evolved into 15 different species. Ranging from the 'flying dragons' of New Guinea , who can glide over 30 metres from the tree tops on their overdeveloped rib cage 'wings.' The “water lizards” of the East Indies who can reach up to a metre in length. All the way down to the little 'toad heads' who are a mere 12 cm long and run around on two legs, we're looking at quite a diverse group of animals.

However, the one's we're interested in locally, scientifically known as Agama stellio vulgaris, are about 20cm long. Living mainly off insects and spiders, with a little light salad on the side, they hide in vegetation or under rocks waiting for their next meal to pass by. Their hapless prey first knows it's come to a sticky end when it gets caught on the end of the lizard's mucous covered tongue. From there on in it's bitten by the first set of teeth and then crushed by the second before being swallowed.

It's all about colour you see if you want to distinguishe between male and female. The last ones are of a brown colour all over unless they're carrying eggs, in this case their head turns blue to warn off any prospective admirers.

On the next rung up are the subordinate males who most of the time are brown with an olive green head. The biggest representatives of this family can reach up to 25cm. Their body is blue, with a red or yellow head and tail. Should any lizard try to muscle in on his territory, the behaviour that follows is as follows: it starts off with a bit of animated 'head nodding' as a sign that trouble is imminent. If the competitor doesn't take the hint then it gets a bit more serious, moving on to a kind of push up where the whole torso of the biggest one begins to bob up and down as he starts to get angry and turn a darker shade. It should be obvious to all but the uninitiated by now that it's time to back off. However, if the smaller lizard doesn't retreat, the biggest one begins to get really upset and starts hopping around for a while before charging across, spinning around Kung Fu style and smacking the young pretender hard with his tail. This continues in a show of bluffs, threats and finally out and out combat until the best man wins.

Female lizards prefer to mate when it's damp, she's ripe for reproduction at 18 months, although it takes the males a little longer to be interested. However, after the tender age of 2 years there's no stopping them. They sneak up behind the young maiden of their choice and nod their little heads up and down in eager anticipation. If madam accepts, she arches her back, lifts up her tail and a couple of minutes of manic thrusting follows. After this, female scurries immediately away into the shade, although male lizard requires a few more moments to regain his composure before continuing with life under a rock.

Usually, half a dozen eggs are laid in a hole in damp sand. A couple of months later they dig their way out and immediately start eating anything they can find. If their nest was a warm one, over 29 degrees, then they'll all be hot-blooded males. The cooler the nest, the more Ice Maidens are hatched. If they manage to survive their predators for their first couple of solitary months, they find themselves a group to join and start the game all over again.