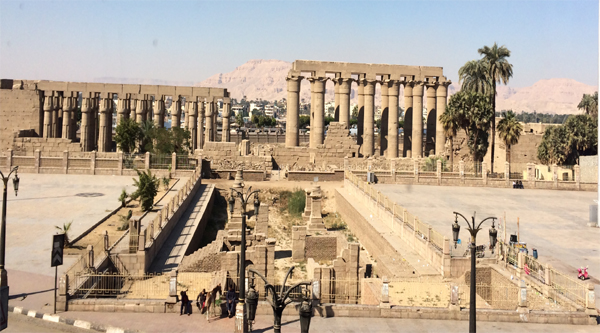 This beautiful temple built on the east bank of the Nile by Amenhotep 3 and dedicated to the Theban triad: the great god Amon-Ra, his wife Mut and their son Khonsu is more famous for its sphinx avenue, once connected the temple with Karnak temple.

This beautiful temple built on the east bank of the Nile by Amenhotep 3 and dedicated to the Theban triad: the great god Amon-Ra, his wife Mut and their son Khonsu is more famous for its sphinx avenue, once connected the temple with Karnak temple.

Luxor Temple - Ipt Rsyt, the Southern Opet and the place of the 1st occasion (creation) was largely the product of two kings: Ramesses II (1290-1224 BC) and Amenhotep III (1391-1353 BC). One of the largest and best preserved of all Egypt's temple monuments, it is distinguished by an elegant simplicity and beauty that set it apart from Amun's labyrinthine palace at Karnak and make it one of the most popular sites in Egypt. The temple consists of the main Entrance which is formed by the pylon of Ramses II, with 6 colossal statues of himself: 2 sitting & 4 standing, but only the 2 sitting and 1 standing are survived in front of the pylon. Also Ramses II erected 2 granite obelisks on the occasion of his royal jubilee. The left one that is 25 meters long is still on its original place & carved with the king's names & titles while the right obelisk which is 23m long is in Paris since 1836.

The original Luxor temple was built at the beginning of the Middle Kingdom, when Amun-Re's cult was established in Thebes. Luxor temple, Karnak temple, a small Amun temple at Medinet Habu, and the king's mortuary temples were all part of Amun's Theban complex. Hatshepsut and Thutmosis III dismantled and rebuilt Luxor temple around 1500 BC, and Amenhotep III rebuilt the enlarged temple proper to its present size around 1375. The eastern sanctuaries and outer wall were dismantled in the late 3rd century AD, when the Roman Emperor Diocletian enclosed Luxor Temple within a gigantic Roman fortress or castrum. In the sanctuary, a chamber originally associated with the cult of the Pharaoh was blocked off and rededicated to the imperial cult. The Romans took down the eastern wall and sanctuaries and rebuilt them as a Roman style columned north anta survives today intact. The south anta was taken down sometime in the medieval period. The Amenhotep III blocks in this area all come from the south anta, and originally formed the side and back walls of the eastern sanctuaries. Many of the blocks join to form sections of the sanctuary walls.

Pharaoh Amenhotep III (1390-1352 BC) began construction of the great Colonnade Hall at the end of his reign, but died before it was completed. Tutankhamun (1336-1327 BC) finished the structure and was responsible for the decoration of most of the inner walls, but died before the decoration could be finished. King Ay (1327-1223 BC) finished the decoration of the southern end of the hall (in paint, the carving was later finished by Seti I), and carved the facade. His successor Horemheb (1323-1308 BC) erased both kings' names and replaced them with his own. In the time of Tutankhamun the Colonnade Hall side walls were as high as the columns, and the whole hall was roofed with great stone slabs. The roof collapsed in the 1st century BC, and the stone blocks of the walls were later quarried and reused as building material around Luxor temple in the medieval period. Many wall fragments were recovered in the late 1950s during excavations which exposed the alleyway of sphinxes in front of the temple. 42 of these fragments will be restored here on the inner face of the wall and will complete part of the Opet water procession, including the divine barge of the god Khonsu and its towboats.

Past the pylon gateway one finds himself into Ramesses II's great entrance court of papyrus bud columns and colossal statuary. The court was brilliantly designed to help support the pylons and forms a single architectural unit with them. Between the columns of the southern half of the court Ramesses II placed colossal granite and granodiorite striding statues of himself beside similar statues of pharaoh Amenhotep III, who was responsible for building the rest of the temple. In this way Ramesses II associated himself with his famous predecessor and shared responsibility for the magnificence of the temple. Just before the celebration of his 1st heb sed or jubilee in his 13th year, Ramesses II erased all of the names on Amenhotep III's statues and replaced them with his own, absorbing the earlier king's identity in the process. The northeast corner of the court is taken up by two larger structures, one built atop the other. Sometime around 6th century AD a Coptic church was constructed in this court, which later was filled in and became the platform for the later Mosque of Abu el-Haggag, which still rises above it. The original tiled entrance to the mosque can be seen adjacent to the pylon entryway high above the ancient ground level. This entrance to the mosque was used until fairly recently; excavations in the court in the 1960s necessitated the shifting of the entrance to the east, to the city side of the mosque. The functioning mosque makes Luxor Temple one of the rare sites in Egypt that has been a place of continuous worship since at least 2000 BC.

In the late 3rd century AD Luxor temple was incorporated into a Roman legionary fortress or castrum on the orders of the Emperor Diocletian. A massive mud brick defensive wall was built around the entire temple complex, pierced by stone gateways. Beyond this eastern gate and another on the west were crossroad tetrastyles (four monumental columns topped with statues). The great eastern gateway and tetrastyle were uncovered by the Egyptian government in the 1930s. Dewatering trenching sponsored by the SCA, Sweden and the US Agency for International Development uncovered the southern brick bastion/tower in 2006.

The southernmost part of a great avenue of human-headed sphinxes linking Karnak and Luxor temples can be seen in front of Luxor temple with sphinxes intact, dating from the time of Nectabebo I (Dynasty 30, ca 380-362 BC). In the late 3rd century AD during the reign of the Roman emperor Diocletian, the entire complex was enclosed within a great Roman castrum, or fortification wall of mud brick with stone gateway. The king's cult chamber in the temple proper was converted into the cult place of the Roman emperors. The temple remained the center of medieval community of Luxor and various churches were built in and around the temple, including the Church of St. Thecla in front of the eastern pylon. The side wall of another church can be seen in the first court under the Mosque of Abu el-Haggag, recently restored.

The colonnade of the temple was designed by Amenhotep III & decorated by Tutankhamon & Horenheb. It consists of 7 pairs of open papyrus columns, each is about 16m high. The court of Amenhotep III contains 64 clustered papyrus columns with bud capitals arranged on 3 sides. Twenty columns at the western side of the court had 11 column which were unstable and moving, so it was decided to take some underground water and soil analyses to find out the reason. The analyses showed that the salt affected the bases of the columns. On January 27th, 1989 during soil samples collection, a workman found a slab of a smooth stone at a depth of 18m underground level, so it was decided to continue work around the slab and as a result a new discovery came to earth. On February 9th, 1989 five wonderful & well-preserved statues were discovered at a depth of 2.5 m under the ground level. The excavation lasted until April 20, 1989 when the last piece was found at the depth of 4.5m. The discovery is known as Luxor Temple Cache and included among the statues found: the diorite statue of King Horemheb, the alabaster sphinx of Tutankhamon wearing the double crown & standing statue of king Amenhotep III wearing the double crown of Egypt. Now they are exhibited at Luxor Museum.

More than 50 000 stone fragments now stored in Luxor temple block yard were once part of the decorated walls of Luxor and Karnak temples. They were re-used as building materials in the medieval period. Many fragments were uncovered in the 1950s during excavations around the Sphinx road. In 1955 the Epigraphic survey of the Oriental Institute, University of Chicago, began a long-term fragment conservation project in partnership with Egyptian Supreme Council of Antiquities. This conservation project has been supported by British Petroleum, The World Monuments fund and USAID. The project 1st focused on 2000 fragments studied by Chicago during 1980s. Initial documentation, treatment and condition monitoring quickly evolved to include an inventory and emergency protection against saline groundwater of the entire collection. Some fragment groups have been restored to their original wall locations. Representative fragments and rejoined fragment groups from Middle Kingdom to Islamic times are displayed here in chronological order. The display allows viewers to see art historical and stylistic changes over thousands of years.

Thirty one blocks of this section of the Luxor Temple Block Yard come from a series of shrines built along the interior eastern wall of the temple sanctuary. These shrines were dedicated to the great pantheon of gods associated with Amun-Re. Because this temple, Ipet Rsyt, was considered to be the birthplace of Amun Re and of all of gods at the beginning of time, there may have been as many as 30 shrines flanking Amun-Re's central sanctuary.