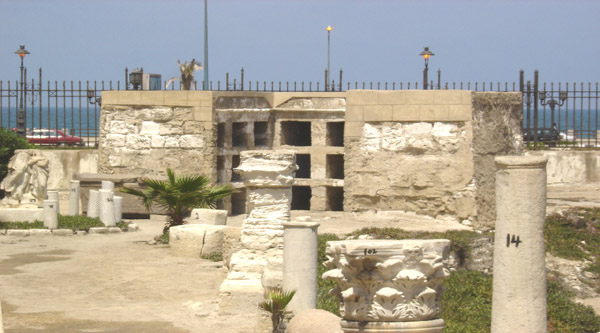 Roman & Greco-Roman tombs discovered in Alexandria city of Egypt consist of many kinds of tombs commonly known as Catacombs. One of the most important archaeological sites ever found in Alexandria are Catacombs of Kom al-Shukafa.

Roman & Greco-Roman tombs discovered in Alexandria city of Egypt consist of many kinds of tombs commonly known as Catacombs. One of the most important archaeological sites ever found in Alexandria are Catacombs of Kom al-Shukafa.

In Alexandria tombs are situated in 2 main areas to the East of Alexandria - al-Shatby tomb and Mustafa Camel; to the West you'll find al-Anfushi and Kom el-Dekka. Eastern tombs date back to Ptolemaic times, they are more ancient. Western tombs date back to Roman times. Greeks were used to cremate dead people and put the ashes in a pot(urn). But Egyptians 1st mummified a dead person and then put the body in the coffin. At the time of Ptolemaics a new way of burring was found "loculus/i" - a room was dug under the ground, then a small hall was made in the wall where an urn was placed. Then the hall was closed.

The tomb of Alexander the Great was considered to be the core of all royal tombs. The tomb was situated at the intersection of (in the middle of the crossing point) two main streets. When Ptolemy IV came he removed all tombs of his predecessors and built a new cemetery with tombs placed at the same distance of each other and paralleled to each other and to the tomb of Alexander the Great. Till Ptolemy VI it was common to bury the body of kings. It's known that the last queen of this dynasty Cleopatra VII was mummified and it's still unknown what had exactly happened with the bodies of the kings between these 2 periods of time whether they were buried or mummified. Ptolemy IX changed the coffin of Alexander the Great and used its gold to pay salary to Greeks mercenaries.

The tomb of Alexander the Great

Tomb of Mustafa Camel dates back to 250 BC and it was discovered by chance in 1933 when a first level of a playground was under construction. Four tombs divided into 2 kinds were found: 1st kind are tombs 3 & 4; they are half buried under the ground and another half over and are not so good preserved. The 2nd kind are tombs 1 & 2 which are completely under the ground. The most important one from this group of tombs is tomb 1.It has water system and some frescoes. They were drown on wet lime. The tomb consists of entrance, stairs down leading to the courtyard in the middle of which there is an altar. Outer walls of the courtyard are decorated with Dorian columns and to the left of the entrance there are 3 rooms. The rooms 2 and 4 contain some loculus. And in the room 3 is just one loculi. There is a water system between rooms 2 and 3, it consists of the well that is on the ground of the room 2. A pool is set in the wall in front of the well and it's connected with the help of clay tubes to 2 small tanks of water situating in the room 3. These two small tanks are connected to a big one that is situated at the courtyard, most of the time the last tank is empty it fills with water only in the case if other two small tanks are already full.

On the other side of the entrance there are 3 small chambers 5, 6 & 7. Each chamber contains loculi and fortunately the walls of these rooms preserve their colours: veined yellow is an imitation of alabaster and dotted red is imitation of granite. To the right side of the main entrance there are 3 sub-entrances A, B, C leading to the corridor 8. Every entrance has a sphinx-guard made of limestone. They are small and some of them are damaged. Behind corridor we find rooms 9,10,11. Room 9 & 11 contain some loculus and at the end of the room 10 there sa-a klime (couch).

There are some groups of Greek names, written on the entrance wall of the room 11. It's unclear if these are names of people who were buried inside or just names of visitors of the tomb.

These tombs were discovered by chance in Karmoz area in 1900 after 12 years of searching. One day a leg of the donkey fell in the mouth of a wheel, when workers tried to make the animal free they discovered the tomb. The tomb dated back to the 1st or 2nd century and consists of 4 underground floors. The 1st and the 3rd floors are completely under the water. The most significant feature of this tomb is the existence of paintings on its walls which represent the overlap of three different kinds of art - Egyptian, Greek and Roman. Catacombs of Kom el-Shukafa

This tomb was discovered behind St. Mark school in 1904 in al-Shatby aria. This is the oldest tomb of Alexandria dating back to 300 BC. There are 2 kinds of tombs in this aria. The 1st one called surfaced tomb that has a covered by sand pit with urn inside. Over the pit we find marble stares with monument which crowns the triangle - a symbol of Greek temple. Unfortunately the 1st kind of tombs disappeared completely.

The 2nd kind is a tomb dug under the ground in the style of Greek house but has one smaller corridor than the real house. The tomb consists of the entrance leading to stairs and a big corridor then a smaller one that leads to a courtyard.

In the garden of Kom al-Shukafa site certain architectural fragments and sarcophagi from excavations in and around Alexandria have been placed, and three small tombs have been reconstructed. The most interesting is housed in a greyish building across from the Curators' House and is called Tigrane tomb