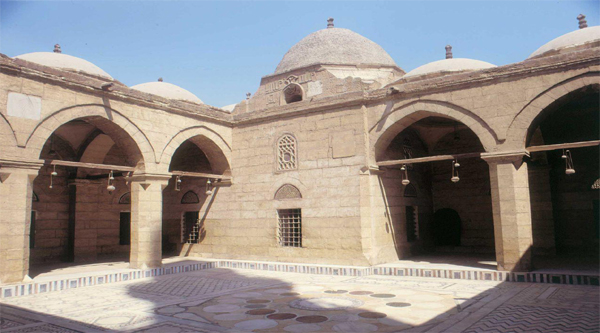 Inner courtyard of the mosque

Hidden within the Citadel walls this small congregational mosque is a very good example of early Ottoman architecture in Cairo.

Near the eastern end of the northern enclosure is a little domed mosque, the 1st of the Ottoman era. The mosque was built by Sulayman Pasha, a court eunuch who became wali (governor) for the corps of janissaries quartered in the northern enclosure. Though small, it is a good example of early 16th century Ottoman architecture. This center-domed freestanding structure is located in a garden enclosure. The minaret has a slender faceted shaft with a conical finial, typical of the Ottoman style and new to Egypt.

The entrance used today, which is not the main entrance, leads directly into the sanctuary. The plan is that of the early Ottoman inverse T, in which the mihrab is located in the stem of the T. The dome in Ottoman mosques was used to cover the whole sanctuary of the mosque, rather than just the mausoleum or the area in front of the mihrab. A handsome Quranic inscription encircles the dome.

The central dome is supported by three semi-domes, which are just as in the Mohammed Ali mosque, supported by spherical triangle pendentives, a technique adopted by the Ottomans from Byzantine architecture. The frescoed walls were restored in the 19th century. It is not certain how faithful they are to the original Ottoman decoration, but a rich effect is achieved.

Otherwise the decoration harks back to Mamluk precedents: the projecting loggia upon molded corbels, the marble wall paneling perhaps appropriated from the mosque of al-Nasir Mohammed, the marble decoration of the mihrab, and the simulated marble veneer made of bitumen and red paste in the grooved inscription around the walls. The mihrab is composed of marble panels held together by iron cleats, decorated with a geometric pattern based on stars and polygonal forms; both the material and the pattern are inspired by Mamluk work. The conical hood, however, is characteristic of ottoman minbars, and similar to the conical finials on Ottoman minarets.

The vault above the main entrance is worth noticing. The raised stucco arabesques and half-palmettes act as frames for painted floral designs, badly in need of dusting and cleaning. This emphasis on floral motifs, rather than on geometric or arabesque ornament, was new in Cairo and was brought in by the Ottomans.