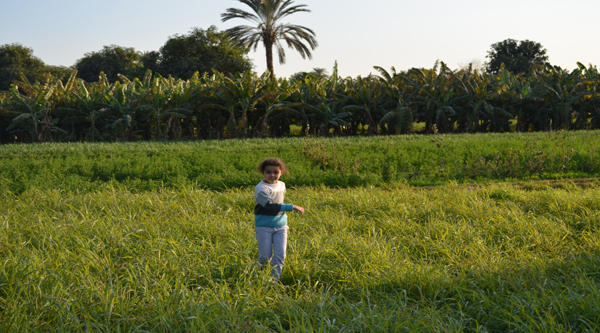 In villages most of Egyptian live in mud-brick homes, their thick walls insulating against the afternoon heat. Flat roofs, exposed to the northern evening breezes, serve as cool sleeping quarters as well as storage areas. Villagers plaster the outer walls and often trim them in blue, a color they believe wards off the evil eye. As a man becomes richer, he can add a second story to his house perhaps for his married son. Those villagers who have made the journey to Mecca paint the legend of their trip on the outer walls of their homes. Such hajj houses, along with the mosques, are the most distinguished buildings in a village.

Some villagers build ornate pigeon coops close to their homes, using the birds as food and their droppings to fertilize crops. Many houses still have dirt floors and lack electricity or running water; women with jars balanced on their heads make the trek to the community well, and children with donkeys haul the precious liquid in jerry cans. All this said, government sponsored building programs have also brought newer style residences and utilities to some villages, particularly those outside the Nile Valley in the Oases and the Red Sea coastal areas.

Egyptians dote on their children, who as they grow up quickly, take on adult duties. The younger ones start by herding sheep and goats. When the boys reach nine or 10, they begin learning how to farm the land that will eventually be theirs. Young girls feed chickens, milk goats and water buffalo (gamoosa), make the dung patties used for fuel, and fetch water. At an early age, they learn to carry loads on their heads; starting with lightweight items such as bread loaves, they graduate to laundry, and then to large clay water jars. Their work gives them a grace of carriage that remains with them throughout their lives.

In Egyptian extended families, grandparents, aunts, uncles, and cousins all feel clan obligations, and these ties unite them in good times and bad. If an individual's crops fail, all relatives contribute from their own supplies. If an animal is fatally injured, the fallahin will slaughter it and each family within the clan will buy a portion, thus sharing the meat and contributing to the cost of replacing the animal. The clan elders arbitrate disagreements, even those between husbands and wives, and give opinions that range from farming techniques to religious obligations.