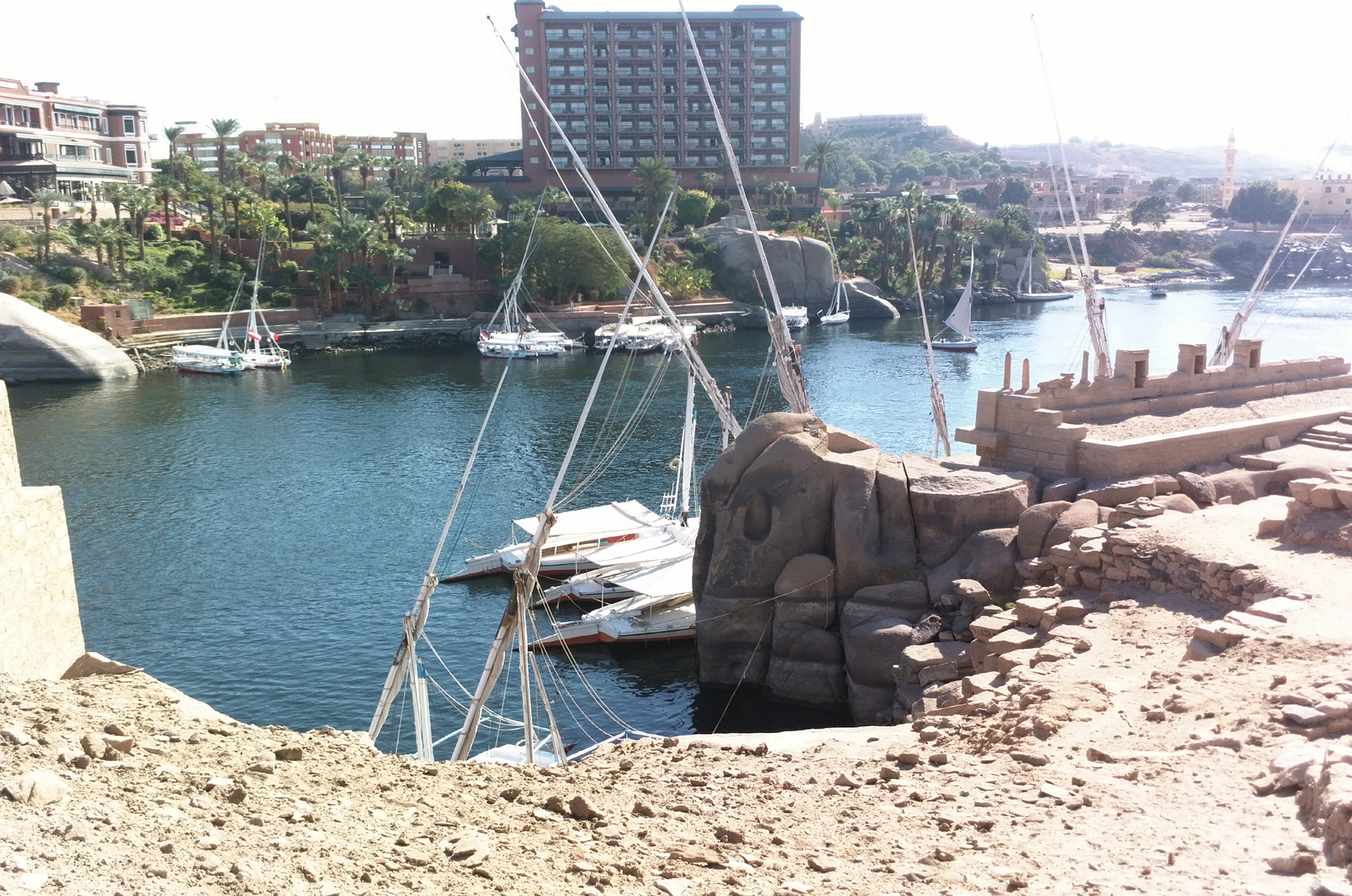 Aswan is a winter resort full of ancient pharaonic monuments and ancient Egyptian sights such as Abu Simble temples, Isis temple on Philae island, Unfinished obelisk and numerous Pharaos tombs.High dam with its beautiful memorial and the hugest man-made Naser lake is also situated in Aswan.

Aswan is a winter resort full of ancient pharaonic monuments and ancient Egyptian sights such as Abu Simble temples, Isis temple on Philae island, Unfinished obelisk and numerous Pharaos tombs.High dam with its beautiful memorial and the hugest man-made Naser lake is also situated in Aswan.

The origin of the name Aswan

Anciently Aswan was called Swani or Swanet that means marketplace. The Greeks later called the area Serene, no other word describes this town so completely. For thousands of years Aswan had been a flourishing borderline market as a frontier station linking Egypt with Nubian and thus the richest of Africa. Aswan was a major terminal for trade and military expeditions. It was the capital of the first Nome (province) and it was the southern gate and therefore had great strategic and economic importance. Its rulers protected the city from marauding tribes and foreign rulers who eyed its wealth.


The surrounding land was rich in building materials: the Aswan quarries were the source of fine and coarse quality granite. Quartz, which were used for polishing stone, was mined from the so-called alabaster quarry north of Aswan and also from the western desert. In the eastern desert there were iron mines where red ochre was extracted for paint. And the largest sandstone quarry in Egypt was situated in Silsilla, further northwards. On the Eastern bank of Aswan we will find Granite Quarries which are situated in the eastern desert, directly to the south of Aswan. These are ancient quarries of granite in hues of red, yellow, brown and dark grey. The earliest pharaoh to explore the quarry was Den of the 1st Dynasty, who used blocks for the floor of his cenotaph at Abydos.

Many blocks were abandoned in various stages of completion. The huge Unfinished Obelisk lying in the northern quarry is still attached to the bedrock. The reason for its abandonment is that flaws were found in the stone. An attempt was then made to extract smaller obelisks from it, but these projects, were abandoned as well. There is no indication to whom it was intended. The only marks on the surface are those of the workmen. Had it ever been completed, it would have weighted some 1,162 tons and have soared to a height of 42 metres.

An ancient Nilometer faces Aswan. Consisting of a stairway on the river’s bank constructed of regular-shaped stones this useful tool was designed that the water, rising & falling with the ebb and flow of the flood, could register maximum, minimum & average water level. The Nilometer was repaired by Khedive Ismail in 1870. A new scale was established and the ancient construction, unused for centuries, came into use once again. A second Nilometer, dating back to the 26th Dynasty, was found during excavation on Elephantine island. The instrument is unique in having its calibration based upon the level that the flood waters reach above the agricultural land, and not how high they are above the low-water mark.

There are many islands big and small around Aswan not to be missed. The easiest way to reach them is to take a felucca from a jetty that are many along the Cornish at Aswan. But some islands need to be specially mentioned as without a visit to these islands your tour of Aswan and whole picture of Egypt will never be completed.

Elephantine lies right in front of the Old Cataract hotel and its landmark Aswan museum (currently closed for renovation since the revolution of 2011) is very well seen from the Cornish. If you want to reach the island, you do not need to take expensive felucca as there is a local ferry every 5-10 minutes from a special place and it costs just 2-3 pound per person. This ferry transfers local Nubians to their homes on Elephantine island and back. The ride takes just 5 minutes and will be a great local experience.

Next island not to be missed is of course Philae island. The jetty to the island is just 10-15 minutes drive from Aswan to the direction of High Dam. The boat costs 85 LE no matter how many you are and will take you directly to the island. It is around 15 minutes sail but you will have plenty of time to enjoy the views. In winter some worm clothes may require as it is windy on the lake. Note that the felucca-drivers usually wait for you on the island not more than 2 hours. Do not forget also to pay them the bakshish over 85 boat rent.

Another very interesting place you can now easily reach from Aswan is New Kalabsha island . Usually this site is visited with Naser lake cruises but it is really easy to visit if from Aswan. The site itself is right behind the High Dam, you can even see it from the Dam if you have good eyesight. To reach the island you have to go behind the High Dam, down the police station to the jetty where you can take a motor-boat to the island. It is highly recommended to do it in the early morning when the sun is not that strong, so you will enjoy the visit. The boat costs around 100 LE, the man will wait you as long as you like, as it is unfortunately very rarely visited site from Aswan, so he is not in a hurry like at Philae. Do not be misled by the first impression of the site; just keep moving to discover these beautiful Nubian monuments. At first glance the island may seem uninhabited, but as soon as you come into the temple you will find the guard with tickets, this is Egypt. While touring the site do not miss very important places like Kiosk of Kertassi, Garf-Hussein temple, Chapel of Dedwin and Beit al-Wali temple, which is situated behind the temple a little bit up to the mountain and not shown from the track.

Aswan Botanical Garden is situated on an island right behind the Isis Hotel. It is nice to take a felucca ride in the afternoon to the garden to walk in shade of trees for an hour or so.

Aswan Dam and The High Dam are also the places to explore, as a great loss in the ancient history is connected with the construction of the last one. Tour to High Dam can be combined with New Kalabsha site visit.

On the Western Bank of Aswan we will find many Pharaohs cut into the rock tombs of noblemen of Elephantine such as 6th Dynasty tombs of Sabni and his father Mekhu. Tomb of Harkhuf with lengthy description of his pioneering expeditions & tomb of Pepi-Nakht, called Hekaib. All tombs have autobiographical texts inscribed on them and related to administrative abilities showing a pioneering spirit; expeditions were made into the unknown upper-cataract region.

One more place not to be skipped while visiting Aswan is Nubia Museum. Situated right in front of the Cataract hotel this unique museum will introduce you to the Nubian culture, its ancient history, modern tradition and lost heritage.

And of course no visit to Aswan is complete if you do not visit the great temples of Abu Simbel. There are few monuments of ancient Egypt that have been so frequently described as this great temple of Ramses II at Abu Simbel. From the time of its opening by the Italian Giovanni Belzoni in 1817 to the present-day, when it has become world-famous for having been salvaged from the rising waters of the Nile, it has fascinated all who see it. There are 2 temples at Abu Simbel: the Great temple of Ramses II & the small temple of Nefertari, his Great Royal Wife. Both were excavated out of the solid rock of a mountain. Ramses II chose a site some 280 kilometers south of Aswan to build the temples. The Façade of the temple, which is actually the cliff face hewn in imitation of a pylon, is crowned by a frieze of baboons. It rises to a height of 32 metres. The width at the base is 35 metres and 32 metres at the top. Dominating the façade are 4 seated statues of a youthful Ramses II. They loom in huge dimension to some 20 metres, and are believed to be the same size as broken granite colossus in the Ramesseum. Nefertri, or Beautiful Companion, was the 1st and most beloved of the wives of Ramses II. We can see her depicted in her temple at Abu Simbel which lies to the north of the great temple of Ramses II and is dedicated to Nefertari and the goddess Hathor. 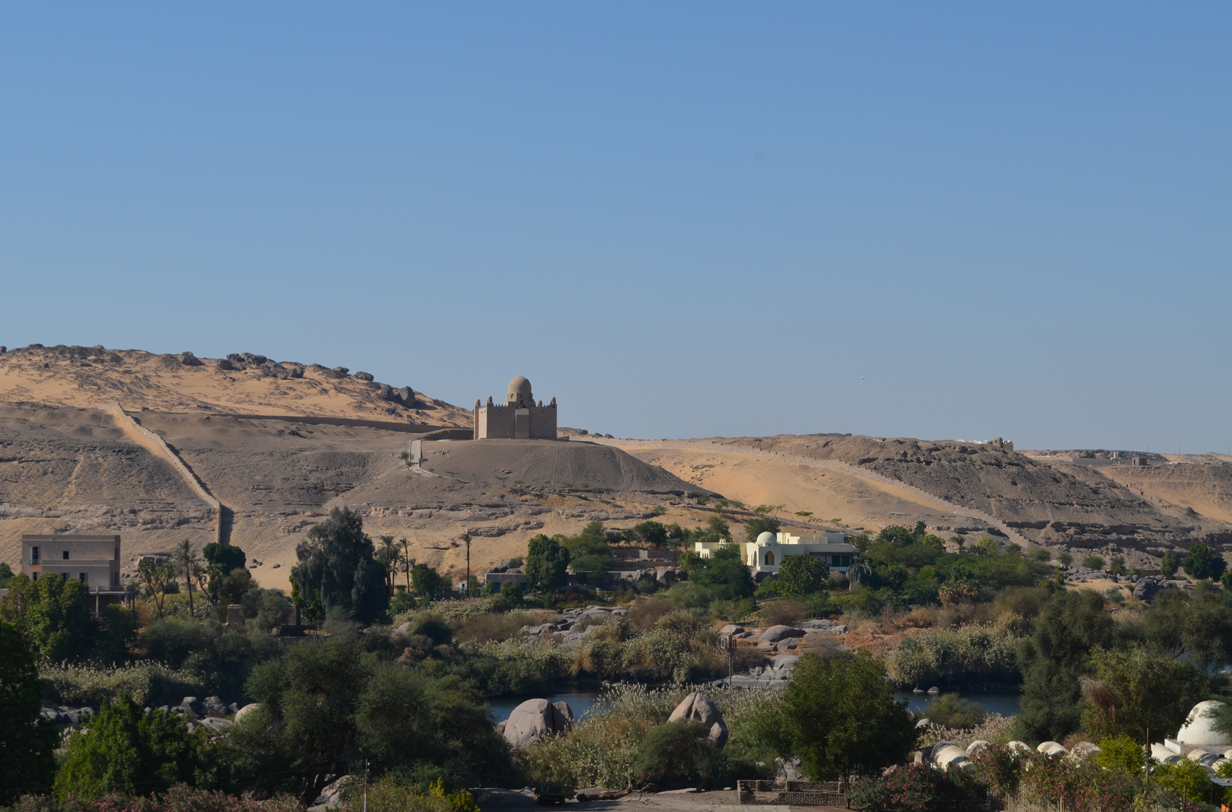 Endless options to choose from a range of things to do in Aswan are not limited to Museums, tombs an...